Discussions of Gates came almost entirely from boys. The comments from girls are confined to questions and attempts to change the subject. For example, in this extract from a rural school, Ann Rose tries, and fails, to insert the more female-friendly celebrity Justin Bieber into a discussion about Gates:

Bob Dickens: /it was on the news yesterday, he was like helping eradicate polio from like the world. So yeah.

Laura: So you would put him in the kind of the good category, yeah? 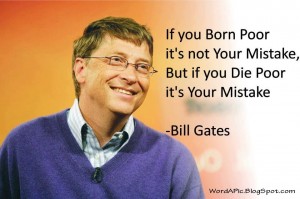 Gates was indeed well valued, most notably for his charitable works. Although, there was some scepticism about these, the dominant view was that they’re admirable and authentic. In this London group, Edward explains why he sees Gates as an ideal celebrity, and dismisses cynics as jealous:

Edward: The amount of money he gives to charity/

Makavelli: But then Messi gives to charity and he’s not a good person is he?

Male: People that become rich. To a certain extent, they get all the fame, people say that they, that they, um sold their soul to the devil.

Similar to the above distinction between Lionel Messi and Bill Gates, in this Manchester group there is a comparison between Gates’ ‘good’ charity given ‘genuinely’ and Angelina Jolie’s done ‘for attention':

Stephano: Erm, I think Bill Gates gives a lot to charity. I definitely know that and.

Kim: Shall we put him, let’s put him down.

Stephano: Erm, I suppose yeah. I mean he’s not really, he’s more famous for what he’s like built, rather than for doing anything else so, yeah. …

Boo: I think he gives money to charity genuinely to, to, to be a good person. Whereas someone like Angelina Jolie I think does it for attention, to be honest.

In all but one case, discussions of Gates’ wealth were accompanied by mentions of his philanthropic activities. There is a sense that the latter are seen to justify the former through this juxtaposition, as in this extract from a London group, where Gates’ gains further value by being attributed as ‘the guy who made the computers’:

Heather: Okay, well if you were going to design a perfect celebrity …

Homer: Oh what’s his name, the guy who made the computers, [laughter] Bill Gates. …

Ryan: Oh he’s like a beast, he’s got loads of money.

Homer: He gives it away for free.

Generally people seemed to have a general awareness of Bill Gates gleaned from their knowledge of Microsoft, occasional mentions in the news and within the school curriculum. However, a couple of boys advocated particularly strongly for Bill Gates as a worthy celebrity and showed evidence of wider knowledge gleaned from personal research e.g. knowing about the rivalry with Steve Jobs. The main example of this was London sixth-former Edward who expressed desire both to meet Gates and to have his life:

Edward: I want tips innit, in general, I just want tips like how, like this guy, all this stuff he had developed so much software and everything, and like all they had to do, and get involved in that. … I don’t really care about the body [a celebrity has] … But as Bill Gates, I get to mess around with computers all day, like seriously I’d be able to do whatever, and that, that come on, like seriously. Mess around with computers all day.

Dave in Manchester was also very enthusiastic about Gates:

Dave: Well I would say my favourite celebrity out of everyone is probably Bill Gates. Because Bill Gates has donated around 50% of his earnings across his life, to Africa. And that’s a lot. … Coz he was worth, pretty much the richest man in the world, second. … He’s donated billions upon billions of dollars to Africa. … Bill Gates stands out, but that’s because he donates money to charity. … He stands out for the right reasons. …

Kim: Gives to charity. Do you think that’s quite a big, quite a good thing?

Dave: Yeah, because … Well, eventually you have so much money, I mean for example Bill Gates, richest man on earth, you couldn’t possibly spend that much money. So he’s just like, well ‘I’ll obviously give it to charity’. Because if I ever like had as much money as he does I could spend it. I’d have so much, I wouldn’t know what to do with it. 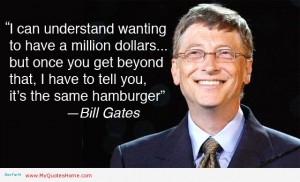 In both Edward and Dave’s talk we can see their desire for Gates’ imagined lifestyle ‘mess[ing] around with computers all day’ and to ‘have so much [money], I wouldn’t know what to do with it’. The next stage of our work is to make connections between these data and what we’ve found in our case study of Gates tracking representations of him across six months.