Some young people do want to be celebrities, but not always for the reasons you would imagine. As a teacher who has responsibility for a tutor group of 14 year-olds who are starting to make choices about future careers and work experience, I was interested to see how much some of the emerging ideas from this project resonated with my own students.

As part of this, initially we explored which celebrities they look up to. Broadly these fell into two categories, pop stars and sportspeople. Most of theme were contemporary celebrities but there were a few that I wouldn’t have expected such as Marilyn Monroe and politician Boris Johnson. Upon discussion, Marilyn Monroe was admired for her beauty by one of the girls and Boris for his intelligence by one of the boys (many of the student however did not know who either of these people were!). 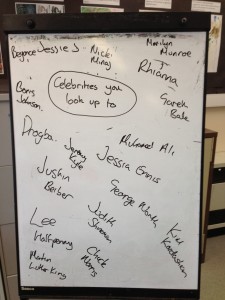 From our discussions, there were certainly similar celebrities being named to those the Celeb Youth Study identified but what was interesting were some of the throw away comments that were almost polar opposites such as “Why would you look up to celebrities?” and “I’d love to be famous”. As they were clearly interested in this discussion, we revisited the issue a few days later by discussing the pros and cons of being a celebrity.

What really surprised me was that it wasn’t until the very end of the discussion that anyone even started to suggest being a celebrity was the ‘easy’ route to being successful and even when they did, this idea was pretty much shot down by the rest of the group with counter arguments. It would be fair to say that the consensus was that the negatives far outweighed the positives for most of the students.

The most fascinating part was that the issues that really concerned them – such as being remembered, being top of their field (when discussing sports) and being well off – were all things that could be achieved in ways that don’t involve celebrity status per se. One student, who probably has a chance of being a successful footballer was very mindful of the fact that he couldn’t do this without being a celebrity but didn’t aspire to that status. 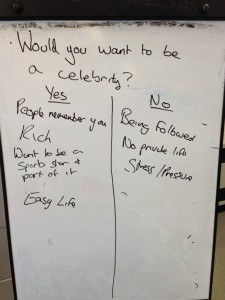 I find it interesting that even those students who spend most of their free time immersed in idolising celebrities and pop culture didn’t see this as their route to success and identified ‘better’ ways of being successful such as getting a good job and working hard. Even in a world of talent shows and rags-to-riches media obsession, there still seems to be a deep understanding within my students that success is reliant on hard work.

The cohort of students I work with is a diverse one; in the thirty students in the group, there are ones with statements of special educational needs, a large number for whom English is a second language, some from well off backgrounds, and some who are eligible for free school meals. There are students who are aiming for grade A’s in all their GCSE examinations and some following vocational pathways who will be aiming to come away with 5 Good GCSE’s so it is fair to say that whilst they may not be fully representative, the group is certainly typical of many 14 year-olds in England today.

Given the discussions and what these students talk about, the media portrayal of youth aspiration and the lack of a work ethic in the current generation seems strange. Yes, like many teachers I bemoan the lack of homework completion by some students, or the waning attention spans from a computer-controlled generation, but what doesn’t seem to ring true is the stories that the current generation have a lack of aspiration, or want an easy rough to success. They seem to have the same types of dreams and understandings of what makes people successful as I did when I was in their position just under 20 years ago.

What I really look forward to seeing is how my own experiences and conversations with this group of young people resonate with the rest of the data from this exciting project.

Jon Rainford is a teacher of Art who recently graduated with an MA in Social Science from the Open University and has just completed a Masters in Education. He is currently applying to read for a PhD in Sociology