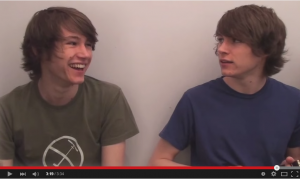 When thinking about masculinity and popularity, the ‘coolest’ boys have traditionally been those who physically intimidated their peers through aggression, misogyny and homophobia. In this guest blog, Max Morris asks whether this model of popularity still exists for members of the YouTube Generation by looking at some of the UK’s most popular vloggers (or video bloggers). He argues that these vloggers reflect how many boys today find homophobia to be unacceptable and value public displays of affection – often by sharing photos, videos and emotional care work on social networking sites such as Facebook, Instagram and YouTube.

In his book, The Declining Significance of Homophobia, Mark McCormack argued that boys in British schools can now achieve popularity without intimidating their peers. Instead, he found four key personality traits determined one’s popularity: 1) social fluidity; 2) emotional support; 3) charisma; and 4) authenticity (read his blog about this topic here). A growing body of research has provided evidence for this trend, and there is even a theory – inclusive masculinity theory – that argues decreasing homophobia is central to how young men’s behaviors are changing for the better.

In an academic article I recently co-authored with Eric Anderson, we applied this theory to examine masculinity on YouTube among Britain’s most popular male vloggers: Charlie McDonnell (Charlieissocoollike), Dan Howell (Danisnotonfire) and identical twins Jack and Finn Harries (JacksGap). Our study was based on thematic analysis of their vlogs along with an in-depth interview with Charlie McDonnell, the UK’s most-watched YouTube celebrity. We argue that the gay-friendly attitudes displayed by these heterosexual men are emblematic of the changing nature of youth masculinity.

Whether it’s hanging out with openly gay vloggers wearing women’s clothes, make-up and accessories, or declaring their love for members of the boy band One Direction, these guys’ behaviours are far removed from traditional masculinity. Indeed, all of Charlie’s vlogs end with a ringing endorsement from Britain’s most-famous gay performer Stephen Fry, who says, ‘You’ve just had the almost imponderable joy of watching Charlie is so cool like, which makes you, like, cool’. 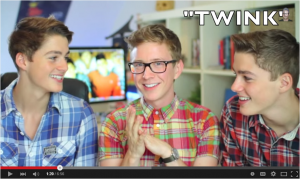 One defining feature of inclusive masculinity is men’s ability to socialise with a diversity of peers, including sexual minorities (what McCormack calls social fluidity). This can be seen clearly in collaborative vlogs with gay YouTubers. For example, in Twin Twinks Learn Gay Slang, the gay vlogger Tyler Oakley describes Jack and Finn to his largely gay male audience as ‘twinks’ – a term used to describe slender, hairless, effeminate young men – clarifying for them, ‘if you were gay, you would be twinks’. Comfortable with this label, Jack and Finn engage playfully with Tyler.

Being willing to display vulnerability and emotional openness is another characteristic of these vloggers. For example, in one of Charlie’s most popular videos, Duet With Myself, he uses a split screen video technique to sing a duet (with himself) about embracing oneself in spite of one’s faults. Similarly, in ENVY, Dan describes himself by saying, ‘I’m a pretty nice guy. I’m about as violent and intimidating as a pink butterfly… that’s got stuck on a marshmallow’.

This emotional openness can also act as a form of emotional support for online communities. Highlighting this, in a recent comment piece for the Guardian, one young woman wrote that YouTube celebrities have a ‘new kind of talent, the talent of being a friend, of being a light in a day that might have otherwise been dark’, which helped her to deal with depression. Or as another teenage fan said, ‘We love the YouTubers. When you’re having a bad time you can just enter their life, they’re with you every day’.

Another characteristic which makes these vloggers so watchable is their charisma. They engage in fun-loving activities to entertain their audiences. Examples can be readily drawn from their vlogs, such as Charlie dying his hair red or Jack dancing around his bedroom in a pink shirt. Although occasionally their risk-taking stunts may hark back to traditional forms of masculinity, these displays of charisma are done without being aggressive or marginalising those who do not participate.

In our article, we suggested that these vloggers represent a new form of online celebrity which is defined by its authenticity. While television struggles to be associated with authenticity because of its institutional location, from a newsroom or studio, with presenters who speak in standardised English, YouTube allows for ‘ordinary’ people to speak directly to their audience, from their own bedrooms and in their own voice. Even with audience sizes rivalling prime-time television, and increasing engagement with traditional media (for example, Dan now hosts a weekly show on BBC Radio 1 with his friend and fellow vlogger Phil Lester), these vloggers have maintained their inclusivity and individuality. 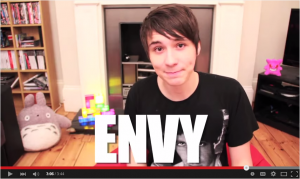 Furthermore, from our interview with Charlie, it seems that these behaviours were encouraged by his peer culture. He told us that when he was in school he showed support for gay rights by kissing another boy and was comfortable being identified with a ‘softer’ masculinity. Asked whether he is proud of his femininity he said, ‘It’s just who I am’, and he received support from his school friends in promoting his vlogs, who simply encouraged him to be himself. Given the similarities between these vloggers and male youth in other recent research, it is likely that the inclusive behaviours displayed by Charlie, Dan, Jack and Finn are judged by their audiences to be authentic. As Charlie put it, ‘It’s just the norm. It’s how all my friends are’.

These vloggers represent a new form of masculinity on YouTube. But they are not the only ones displaying inclusive masculinity. Other YouTube celebrities (who we did not focus on), including Alfie Deyes, Marcus Butler and Joe Sugg, exhibit similar behaviours and attitudes. While these middle class men are offering new behaviours for YouTube, they are modelling and mirroring the masculinities of young British men. This is part of a broader trend of declining homophobia which has allowed boys to embrace behaviours that would once have been stigmatised as ‘girly’ or ‘gay’. What McCormack has called the ‘One Direction effect’ is now carried through to online celebrities. These men have not only benefitted from the youth culture that they grew up with, but are also contributing to it by promoting their inclusive masculinity to millions of young viewers.

Max Morris is a sociology and social policy PhD student, and postgraduate assistant to the Centre for Sex, Gender and Sexualities, Durham University. His research documents the increasingly positive experiences of sexual minority youth, changing attitudes toward sex and relationships, and the influence of social media on masculinities and sexualities.