I am a confident Black woman, 22 years old. I have blonde braids in my hair. I have an eye for men and I’m proud of my beautiful physique… I’m sitting on a tube. All of a sudden people start getting up across the carriage and before I know it the majority of passengers get up and start singing racist chants. A parent in front of me smears his white baby’s face with chocolate and puts a sponge on his head to imitate my blonde Afro (but this is child abuse). I do nothing. I try to stay calm and continue playing on my iphone, trying hard to look down at my mobile screen, and concentrate on the game I was playing. Sickening abuse is hurled, passengers start singing ‘monkey’ chants and more than a 100 inflatable bananas are waved around by passengers in front of me. The consequence? I am fined £8,200 by TFL staff for reacting by using a ‘vulgar hand gesture’ as I get off the tube.

Can you imagine that? In this blog post, Aisha draws on data collected from the case studies to ask us to consider what counts as racism…. 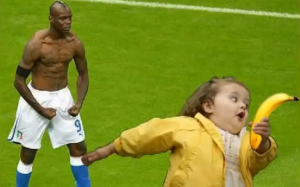 Actually, I am not a confident black woman who has an eye for men, and I’m not sitting on a tube. This is in fact the experiences of Black football star Mario Balotelli. This incident – or an approximation of – is what I came across whilst reading and analysing some of The Sun newspaper articles and short YouTube videos (2013) on Balotelli as part of the case study data collection for the CelebYouth project. I discovered that Balotelli has been subjected to various forms of racist abuse at football matches, including monkey chants and inflatable bananas being waved around by fans – an object which it is assumed is meant to racially stigmatise and degrade Balotelli as not even human but animal.

What is shocking is the response to this overt and mass performance of racism by the crowd by FA officials. Despite being the victim of abuse, Balotelli was then fined by the Italian football authorities for making a ‘vulgar hand gesture’ to fans at the end of the match. Yes, Balotelli had these experiences whilst playing football in Italy but British newspapers have covered the stories; young boys and girls of a variety of ethnicities with an interest in football will undoubtedly have read or watched these very matches. What is this persecution of Balotelli rather than the crowd saying about the tolerance of racism in sport and wider society? Newspaper reports are almost justifying this ‘Balotelli racism’ because of his character – throughout his media coverage Balotelli is portrayed as a childish fool (that can’t even dress himself) , a womaniser, and a ‘feckless’ father who hasn’t seen his own daughter since she was born. Because of these negative representations , it appears that ‘Balotelli racism’ is therefore justified. Why are we encouraged to dislike him rather than be outraged by the level of abuse he has been subjected to?

Why is the racism experienced by Balotelli any different to the above scenario of the black woman on the tube?