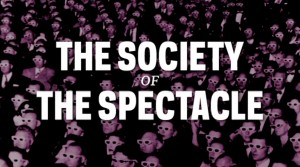 “The individual who in the service of the spectacle is placed in stardom’s spotlight is in fact the opposite of an individual, and as clearly the enemy of the individual in himself [sic] as of the individual in others. In entering the spectacle as a model to be identified with, he renounces all autonomy in order himself to identify with the general law of obedience to the course of things. Stars of consumption, though outwardly representing different personality types, actually show each of these types enjoying an equal access to the whole realm of consumption and deriving exactly the same satisfaction therefrom. Stars of decision, meanwhile, must possess the full range of accepted human qualities; all official differences between them are thus cancelled out by the official similarity which is an inescapable implication of their supposed excellence in every sphere. … Kennedy the orator survived himself, so to speak, and even delivered his own funeral oration, in the sense that Theodore Sorenson still wrote speeches for Kennedy’s successor in the very style that had done so much to create the dead man’s persona. The admirable people who personify the system are indeed well known for not being what they seem to be; they have achieved greatness by embracing a level of reality lower than that of the most insignificant individual life ­­ and everyone knows it.

“The false choice offered by spectacular abundance, based on the juxtaposition, on the one hand, of competing yet mutually reinforcing spectacles and, on the other hand, of roles ­­ for the most part signified by and embodied in objects ­­ that are at once exclusive and interconnected, evolves into a contest among phantom qualities meant to elicit devotion to quantitative triviality. Thus false conflicts of ancient vintage tend to be resuscitated ­­ regionalisms or racisms whose job it now is to invest vulgar rankings in the hierarchies of consumption with a magical ontological superiority. Hence too the never­ending succession of paltry contests ­­ from competitive sports to elections ­ that are utterly incapable of arousing any truly playful feelings. …

“What spectacular antagonisms conceal is the unity of poverty. Differing forms of a single alienation contend in the masquerade of total freedom of choice by virtue of the fact that they are all founded on real repressed contradictions. Depending on the needs of the particular stage of poverty that it is supposed at once to deny and sustain, the spectacle may be concentrated or diffuse in form. In either case, it is no more than an image of harmony set amidst desolation and dread, at the still centre of misfortune.

“The concentrated form of the spectacle normally characterises bureaucratic capitalism, though it may on occasion be borrowed as a technique for buttressing state power over more backward mixed economies, and even the most advanced capitalism may call on it in moments of crisis. … The dictatorship of the bureaucratic economy cannot leave the exploited masses any significant margin of choice because it has had to make all the choices itself, and because any choice made independently of it, even the most trivial ­­concerning food, say, or music ­­ amounts to a declaration of war to the death on the bureaucracy. This dictatorship must therefore be attended by permanent violence. Its spectacle imposes an image of the good which is a resume of everything that exists officially, and this is usually concentrated in a single individual, the guarantor of the system’s totalitarian cohesiveness. Everyone must identify magically with this absolute celebrity ­­ or disappear. For this figure is the master of not-­being-consumed, and the heroic image appropriate to the absolute exploitation constituted by primitive accumulation accelerated by terror. If every Chinese has to study Mao, and in effect be Mao, this is because there is nothing else to be. The dominion of the spectacle in its concentrated form means the dominion, too, of the police.”