As Michael Billig’s classic study of how ordinary people talk about the Royal Family demonstrated, The Royals present an interesting ‘academic puzzle’. Yet, in recent years relatively little academic attention has been paid to the cultural and political significance of the Windsor family. As scholars working across both Sociology and Cultural Studies, Laura Clancy and Kim are both interested in how the Royal Family are mediated, particularly against a backdrop of austerity, ever-growing inequality and declining social mobility. As they show in this blog, academic research into inequality would be greatly enhanced by a critical examination of the Royals.

Elsewhere we have examined how the Royals’ position of immense wealth and privilege is justified and legitimated, arguing that constructions of ordinariness and authenticity are pivotal in erasing structural inequalities and enhancing public perception of the Royals. In this blog post we will further examine these processes by considering a recently aired television documentary, When Ant and Dec Met the Prince: 40 Years of the Prince’s Trust.

Screened on the 4 January 2016, the show celebrated the 40th anniversary of Prince Charles’ charity The Prince’s Trust, and featured the popular television personalities Ant and Dec accompanying the Prince on a number of public engagements. Through deconstructing this particular media performance, we demonstrate how a ‘discursive ascendancy’ of ordinariness is structured through a variety of representational strategies, namely through the cultural coding of Ant and Dec as ‘normal blokes’, and the framing of Charles’s philanthropic endeavours.

Presenters Ant and Dec have become ‘national treasures’ over a 20-year career; featuring on many of Britain’s most popular TV shows (e.g. Britain’s Got Talent; I’m a Celebrity, Get Me Out of Here). With their ‘cheeky-chappy’ persona and strong Newcastle accents, they have become symbolic of ‘working classness’, trading on their origins on working-class estates in Newcastle to present themselves as relatable and ‘ordinary Northern blokes’. They are able to articulate normalcy in ways that other presenters normally appearing in the Royals’ highly orchestrated media events such as Trevor McDonald could never achieve. The choice of them to present this documentary is significant and deliberate, enabling the Royals to authenticate their own ‘ordinariness’ through proximity to Ant and Dec.

Many episodes within the programme were oriented around the pair’s unsettled classed belonging, as they performed a sense of being out of place within a world of privilege. As experienced celebrities, they would be familiar with the conventions of glamorous society engagements. But with exaggeration as if from Willy Russell’s Educating Rita, Ant and Dec displayed unease with the airs and graces of ‘high society’ numerous times: from their nervous opening line ‘we’re going to try and behave properly’, to the closing scenes where they tipsily drank wine while staying at Clarence House. Despite constant assertions of their friendly relationship with Charles, their symbolic distance from his lifestyle and their comical awkwardness in the presence of royalty worked to emphasise their ‘ordinariness’ and align them with the audience.

At the same time, the pair’s clear fascination with Charles and childlike awe when experiencing his lifestyle constructed royalty as something desirable and aspirational. Their discomfort upon entering Clarence House for the first time very quickly morphed into reverence when viewing Charles’ ornamental warship. Later, when shown to their rooms for their overnight stay in the palace, they giggled in amusement as the butler unpacked their suitcases. Although very different from their (and thus our) own lives, royalty is constructed as something to covet.

In many ways, this emphasis on Ant and Dec’s working-classness could produce a sense of distance between the Royals and themselves (and thus the audience), only further emphasising royalty’s elite status. However, the show was carefully framed to highlight Charles’ relatability while downplaying – or at least depoliticising – any sense of social distance. Indeed, Charles is constantly referred to as someone ordinary and ‘down to earth’. His relationship with the presenters is one of informality: they call him ‘Sir’ as opposed to ‘Your Royal Highness’. 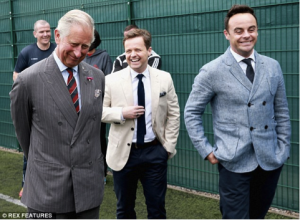 Prince Charles was not the only royal who was produced as ordinary. Ordinariness was particularly visible during the interview with Princes William and Harry, as the two Princes’ relationship was configured in direct comparison with Ant and Dec’s. After William suggested Harry was often ‘scrounging food’ from him and Kate Middleton because he lived nearby, Ant retorted ‘he does that too’ while gesturing to Dec. Informality and laddish ‘banter’ structured the interview, as William’s utterance of the word ‘bollocking’ prompted a flurry of tweets by viewers celebrating his ordinariness. Telling Ant and Dec of Charles’ tendencies to embarrass them at public events by laughing too loudly and at the wrong moment, the Princes cultivate the image of their father as ‘just a normal dad’.

At the end of the programme, Ant and Dec conclude that the Prince can relate to the ‘ordinary people’ helped by the Trust because, under all the wealth and majesty, he is quite ordinary. Yet as Billig reminds us, his ‘ordinariness’ is only ‘worthy of comment’ because of his extraordinariness. This simultaneous positioning of Charles as both ordinary and extraordinary is central to the legitimation of the monarchy. The discourse which constructs the royals as ‘ordinary’ – as ‘just like us’ – ‘invites demystification for it implies that an ordinary human being stands behind the extraordinary role’. It positions the speaker as refusing ‘subservience’ to a superior royalty, while reinforcing their position as  royal subjects.

‘He’s not just a distant prince in an ivory tower, he wants to connect with young people’

Charles’s relationship with ‘ordinary people’ – and hence his ‘ordinariness’ – is also directly portrayed in the programme through his charitable work. Throughout, the Prince is represented as a caring, empathetic figure. He tells us that he is committed to ‘do something to help people who don’t have the same opportunity as me’. His commitment to ‘giving back’ is reiterated and confirmed by Ant and Dec, and in interviews with his sons William and Harry, and his wife Camilla.

Charles’ work for the Trust is evidenced at four separate events: a formal drinks party, an informal dinner party, a visit to a juvenile prison and a tour of a branch of high street chain Marks & Spencer. Each site is purposefully chosen, demonstrating the ‘variety’ of work Charles undertakes. At each occasion Charles is represented meeting an array of stereotypically ‘ordinary’ people, and he communicates with them informally and jovially. In the prison, he meets two young prisoners, stereotypical in their strong local accents and large tattoos. At the drinks party, Charles chats to Gina Moffett, a young black woman from North London given a grant by the Trust to set up a catering business after leaving prison. Charles’ apparent ease communicating with people from various classed backgrounds and apparent ability to empathise with those less privileged further authenticates his ordinariness. Gina cements this portrayal when she states, ‘every time I meet him, I feel like I’ve known him for years’. 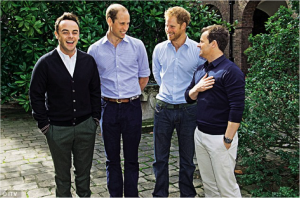 Royal philanthropy has functioned as a key trope of royal representations for many years, from the ancient conception of the divine ‘royal touch’ able to cure illnesses, to 3000 contemporary charities listing a member of the royal family as patron. Frank Prochaska argues that conspicuous philanthropy provides ‘respectability and visibility’ for the monarchy, with the mediated discourses of this patronage demonstrating their accessibility and morality; a rhetoric currently being re-animated in representations of celebrity philanthropy and social activism.

As Jo Littler has argued, however, in times of austerity and the dismantling of the welfare state these acts of ‘celanthropy’ are far from benevolent: these activities ‘do not innocently exist alongside larger systems of inequality, but are rather imbricated with and generated out of them’. The celebration of elite individuals such as the Prince, who donate large sums of money to causes such as youth unemployment – as the Prince’s Trust does with its emphasis on ‘getting young people into work’ – not only abdicates the state of its responsibility. It also obscures the deliberate decimation of vital services and safety nets for young people that has taken place under the current Conservative Government’s austerity programme.

‘It’s the story of my life really, we have to overcome people who don’t see the point’

This latest television outing is part of a long history of mediations which work to make the Royals appear ‘just like us’, including Royal Family, It’s a Royal Knockout and Diana’s infamous confessional television interview with Martin Bashir. Such cultural representations – though always sites of struggle and contestation – are key mechanisms through which the immense wealth and power of this institution is legitimated. The monarchy are invested in maintaining power and sustaining public affection, and judging from the discussion on social media during and after broadcast (as the tweet above suggests), When Ant and Dec Met The Prince largely succeeded in this regard.

As we have suggested, the mediation of the Royals deserves critical cultural analysis, particularly given the current socio-political environment. As their wealth and power takes on new meaning against the backdrop of rampant neoliberalism, widening inequality and enforced austerity, the ideological implications of the Royal family represent a worthy and important ‘academic puzzle’. Other members of the Windsors – from ‘thrifty housewife’ and ‘commoner’ Kate Middleton to Prince Harry the rebellious ‘Lad’ – continue to trade on performances of ordinariness, relatability and democratisation. These characters will be the subject of our special panel ‘Celebrity elites and the cultural politics of austerity’ at this year’s Celebrity Studies conference.