The context for this post is my contention that we are living in an age of  ‘fast academia’. 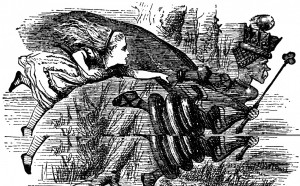 The best metaphor I can find for this is from Lewis Carroll’s wonderful story Alice Through the Looking Glass, when Alice is taken on a race by the Red Queen. Pausing, Alice is surprised to find herself both out of breath and in exactly the same place as before they started sprinting along. 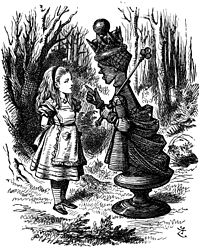 “Well, in our country,” said Alice, still panting a little, “you’d generally get to somewhere else — if you run very fast for a long time, as we’ve been doing.”

“A slow sort of country!” said the Queen. “Now, here, you see, it takes all the running you can do, to keep in the same place. If you want to get somewhere else, you must run at least twice as fast as that!”

In academia we have long been invoked to do more but now we seem to be getting targets to, as a minimum, raise the ratings students give to our teaching, increase both the number of students we recruit and the level of their qualifications, speed up the pace at which our doctoral students complete, and increase our research and consultancy income. To get anywhere you have to run even faster than that.

Of course, I’m not the first person to note the accelerated pace of university life. This has been identified by Bronwyn Davies, Jenny Browne, Susanne Gannon, Eileen Honan and Margaret Somerville as part of neoliberalism in which competitive indivdualism, economic drivers and audit culture have taken over the public sector:

Within the terms of the new system individuals are presented with an (often overwhelming) range of pressing choices and administrative tasks for which they are responsible and, having learned to be one of the pairs of eyes that watches and calculates value in terms of the budget, we ‘responsibly’ gaze on our own acts and the acts of others. And we shape ourselves (or try to) as the ones who do have (a monetary) value to the organisations we work in.

And, as the recent Prism scandal shows, there is no better place to surveille anyone – even oneself – than the world wide web.

I love this website that Kim, Laura and I have created. I enjoy doing online communication – the immediacy and supportive feedback  are more to my taste than the long timescales and anonymity associated with publishing via peer-reviewed journals. Yet I am disturbed by the alignment between fast academia and going digital.

Writing a blogpost rather than an entry in an research diary generates fast responses and produces a useful and measurable output. By using google analytics I can track how many people accessed which parts of our website, how long they spent there and whether or not they stayed on the site. I can find out how many people each of our posts reached through Facebook and how many people are talking about them. Twitter and YouTube too provide multiple ways of measuring the ‘impact’ of our work – which tweets get favorited, which retweeted and which disappear without trace? This all fits remarkably well with the insistence on accountability, and with the growing impact agenda. Moreover, documenting a project online aligns with the contemporary compulsion to tell (what Michel Foucault called confession).

Of course there are choices about how we engage, and as Laura discusses weve done it collectively – I really like the way that no-one knows for sure which of us is behind the Twitter (though it is usually Kim). It seems to subvert the emphasis on the individual, entrepreneurial academic, that the internet might otherwise fuel. I feel we need to be continuing to ask: How is it changing research? What are the alternatives?

I end with one way that I feel this aspect of digital sociology is changing my practice as an academic. While, there’s no clear distinction between the descriptive and the analytic, the need to formulate my ideas into something that can be blogged or even tweeted is moving me more quickly from a more descriptive to a more analytic register. My favourite example of this is from an Amy Hempel short story The Harvest cited by Chuck Palahniuk in Non-Fiction. Here, instead of being offered the pre-analysed formulation that ‘the boyfriend is an asshole’, Hempel describes how, after a car crash, ‘we see him holding a sweater soaked with his girlfriend’s blood and telling her, “You’ll be okay, but this sweater is ruined”’. While the second account is far from innocent, it is very different and it allows one’s thoughts to follow different lines of flight. Which lines of flight does the internet open up and which close down?