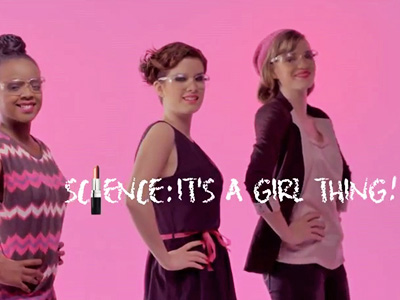 Three years ago the European Union launched a now-infamous video to promote Science called ‘It’s a Girl Thing!’ This 45 second promo looked like a cross between a cosmetics ad and a girl group music video. Within days, the EU responded to the flood of criticism by withdrawing this video from YouTube and rewriting much of the rest of their campaign. Recently, Heather decided to use this video to spark discussion among participants in a science and equity workshop. After scouring YouTube she found just one version of the video remaining. Yet two weeks later it too had been taken down. In this short post she wonders why bubbling test tubes and lipstick propellants remain such a dangerous combination that they need to be censored from our internet commons.