What are some of the first ideas about social class that children are exposed to? For many children, movies provide early ideas about class inequality. About one third of young children watch a movie every day and many watch the same movies repeatedly. Children tend to grow up in neighborhoods, schools, and families that are all of one class, so movies offer children a key glimpse into a social class that is not their own. In a recent article in the Journal of Poverty, Jessi Streib, Miryea Ayala and Colleen Wixted present findings from their analysis how class is portrayed in children’s movies. As Jessi discusses in this guest blog post, their analysis illustrates that children’s movies provide a consistent and worrying message: that social class inequality is benign.

For our research, we conducted a systematic and inductive content analysis of how social class is portrayed in every G-rated movies (films classified as suitable for general audience and considered children’s movies) that grossed over $100 million at the US box office as of January 1, 2014. These included classic texts such as ‘Aladdin’, ‘Marry Poppins’, and ‘Toy Story’. 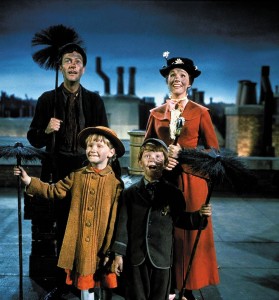 In doing so, we discovered the following: 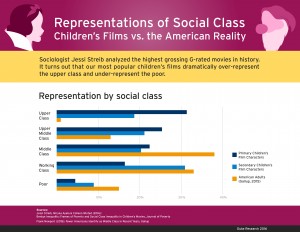 Together, each of the above themes portrays social class inequality as benign. Few people are at the bottom of the class ladder, those who are do not suffer, and those at the top help those at the bottom. Characters from different social classes generally have shared interests, regularly help each other, and even love each other. The class structure is also represented as meritocratic, as all deserving and ambitious characters get ahead and all undeserving characters lose what class privileges they had. In these movies inequality exists, but it has few negative effects for good people.

Ironically, presenting social class inequality as benign isn’t actually so benign. If children internalize these messages, they may see no need to work to lessen poverty or inequality. If the movies are right, we all already live in a time of happily ever after.

Author Biography: Jessi Streib is an Assistant Professor of Sociology at Duke University. She is co-author of “Benign Inequality: Frames of Poverty and Inequality in Children’s Movies,” as well as The Power of the Past: Understanding Cross-Class Marriages.