In this guest post for the CelebYouth blog, Gemma Ahearne a PhD student from Liverpool John Moores University, looks at the regulation of class and gender in UK TV programme Snog Marry Avoid in which ‘ordinary’ women can get their 15 minutes of fame by transforming from ‘bad girls’ to ‘good girls’ and subjecting themselves to the scrutiny of the male audience and the camera.

Snog Marry Avoid?  is a BBC Three show that started in 2008 and is now on its sixth season. The show takes ‘fake’ hyper-visible excessive women, who are given the chance of redemption through a robot called POD (Personal Overhaul Device). The show sets to transform these inauthentic women (and occasionally men) into ‘natural beauties’. Through transforming their looks, their characters may also be saved. POD and presenter Ellie are on a crusade to ‘fight the fakery’. 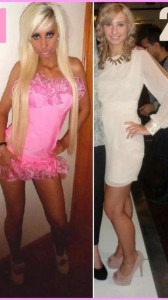 I take Season 6, Episode 7 as a case study. It is advertised as follows: ‘POD and Ellie meet Sophie who is obsessed with hair extensions and Danny who has bright pink hair and skin so orange that he looks like a troll, and can’t understand why he can’t get a boyfriend. Also, Ellie goes around Birmingham learning about the “Brum Bum”’ (not racist at all…).

Sophie Bow is the kind of project POD thrives on. The BBC Iplayer blurb states ‘Hair extension-obsessed Sophie learns the meaning of sophistication’. A young working-class woman with a penchant for revealing clothes, fake tan, excessive make up, hair extensions and the celebration of excess, POD must redeem this ‘tasteless’ young woman. Sophie describes her style as ‘Boobs out, Bum out’, all the signifiers of improperly performed femininity that POD wields war against.

Sophie’s lack of self-regulation and censoring of her body is presented as dangerous. Her mother says of Sophie’s look ‘It gives the wrong impression, it’s a bit of a worry’. Comments like this are rarely expanded upon, but feature predominantly in our victim-blaming culture with other rape myths. After all, revealing clothes are often used as a justification for violence against women. Revealing the body in public sends out ‘the wrong signals’ because a woman’s body is read as a guide to appropriate social behaviour.

Sophie wants to “be noticed”, yet as a hyper-visible woman, she’s coded as defective. Such excessive bodies can’t perform gender properly, they reject hegemonic white middle-class standards and are thus seen as dangerous and threatening. The boundaries must be upheld.  Snog Marry Avoid?  can be read as policing this excess: it puts female bodies on trial for all to survey and judge.

POD directly confronts Sophie: ‘I’m confused as to why you want to look like a slapper’. Physical excess, for women at least, is conflated with sexual promiscuity, and sexual ‘looseness’ is (almost) always a negative, especially for working class women. Sexual liberation is another rejection of the universal white standards.

Sophie’s family, friends and boyfriend have prompted her to want a ‘more classy’ look. ‘Nice girls’, ‘good girls’, don’t wear short shorts, bra tops and ultra long hair extensions. ‘Respectable’ girls abide by the rules: they wear a natural palette on their faces, they ‘tone things down’ and want to look sophisticated. After Sophie’s make-under, POD declares: ‘Not only do you now look sophisticated, you can actually say the word’, linking gaudy excess to ignorance. 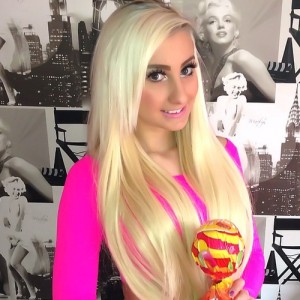 Snog Marry Avoid? Plays on the virgin/whore dichotomy, in which nice boys only want good girls. Those who appear in the show are judged according to whether male members of the public want to ‘snog, marry or avoid’ them. Marriage is the highest accolade, a snog is second in the hierarchy, but to be ‘avoided’ is the ultimate exclusion.  On the show it is always men who decide what it is acceptable for a woman to look like.  Each woman who appears (or flamboyant gay man) is paraded in front of POD, for the verdicts to be given.  POD offers to cleanse away the fake tan and fake eyelashes, but also the dirt that is read through the body. In this way, the heavily made–up ‘slut’ can be reverted to a good innocent girl who is worthy of the right type of attention.

Keith Hayward  and Majid Yar (2006) argue that chavs are deemed problematic due their inability to consume properly, they excessively participate in consumption and are ‘aesthetically impoverished’. Sophie is deemed to be vulgar and lacking in the capital to make the correct choices (i.e. white middle-class choices). Her lack of taste, her lack of moral boundaries, is read as a perceived lack of authentic self. It is not a surprise that the episode calls out ‘Bogus Brummies’, it is a quest for an authentic femininity behind this fraudulent caricature.

The end of each episode features an opportunity to catch up with the guests, to see if they are truly reformed characters, or have seeped back into their repulsive habits. Sophie has ditched the natural look POD blessed her with, but has ditched the fake tan, showing a glimmer of hope for the curing process, and declares she is ‘more covered up’ now, leaning in the right direction of decent femininity.

Shows like Snog Marry Avoid? act as form of surveillance: a reminder for all women that femininity is to be performed properly or it will be put on trial and punished for its excesses. This is regulation of femininity happens across wider celebrity culture as Kim, Heather and Laura have identified elsewhere.

I am a first year PhD student in Sociology at Liverpool John Moores University. My research is on lap dancing clubs in Liverpool, with a focus of the public’s view on lap dancing, and lap dancers’ view of themselves. I am treating lap dancing as authentic labour, and am interested in stigma, construction of deviance, and the problem of ‘excess’ as well as having a keen interest in policy. My other research interests include:  celebrity culture, whiteness, the female chav, excessive bodies, deviant bodies, exclusion and sex work. I am interested in how female sexual bodies are governed and regulated.  My blog is www.plasticdollheads.wordpress.com and you can follow me on twitter at @princessjack