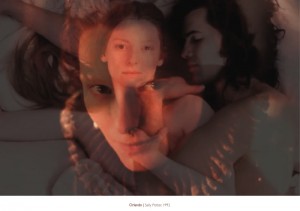 In my thesis I described “myself as thinking through fiction, with ‘real’ events mediated through an imaginary filter provided by everything from Howard’s End to Ally McBeal” – carefully selecting one high culture exemplar (old, British, canonic, literary) and one low culture exemplar (contemporary, US, popular, televisual). I followed this by quoting bell hooks: “Life-transforming ideas have always come to me through books. Even when profound experiences alter my sense of reality, those lived moments usually return me to ideas I have read or lead me to further reading”. And I continued: “Ultimately I consider the most successful attempts to capture the contradictory nature of self and life, are fictional … Along with Acker et al. (1991, p.149) I wonder whether: ‘Virginia Woolf, among other novelists, may give a better account of the conscious experiencing of life in all its episodic and unorganized ways than we sociologists can achieve'”.

Yet the only fictions I remember managing to cite in my work were Jonathan Franzen’s The Corrections, Jeanette Winterson’s Oranges are Not the Only Fruit, J. D. Salinger’s Catcher in the Rye and US high school drama My So Called Life. I had a chapter where I looked at media representations; but I used the films there as empirical data rather than as sources of original ideas. Even allowing that there may be one or two other fiction references that have slipped my mind, that does seem desperately few for someone who represents herself as “living through fiction”.

All such other references were confined to the acknowledgements, where I wrote: “A few months after starting this PhD I gave up fiction (with only occasional relapses) so that I could concentrate on the mountains of books and papers relating to my thesis. Since then I have turned to television and films to satisfy my appetite for stories. I doubt I would have made it to the end without Buffy, The Sopranos, Six Feet Under, Oz, and Big Brother, to name but a few”.

Music seems to get similarly short shrift in academic work. In an exception to this rule, Tony Cotton footnoted the music he listened to as he wrote his thesis. In doing this he gave more space and prominence to music than in most academic work, but footnotes, like acknowledgements, are relatively-peripheral academic spaces. Similarly, Katherine Frith and  Claire Hayward have eloquently blogged about the music that accompanies their work, with Claire drawing out the way that music is not mere accompaniment but a source and inspiration for ideas. But why is it so difficult to move music, novels, films and other fictions from the margins of academia – blogs, acknowledgements and footnotes – to the centre of the action?

Why so little fiction?

Since writing my thesis, my citations to fiction have become even fewer and further between. I guess there’s a couple of reasons why…

First, in contrast to my PhD days, I am now, more-or-less a fully-fledged academic and so more enculturated into the dominant ways of doing things. And those certainly do not include citing fiction. I experienced more freedom in how I constructed my doctorate, when ‘all’ I had to do was satisfy two hand-picked examiners, than in writing journal articles and books, which have to variously satisfy editors, publishers and anonymous reviewers. Getting published matters to me and to my institution and so I play the academic game which includes referencing ‘the literature’ (and not literature). Looking at this more positively, there are, of course, many fabulous academic texts that are important to my work. And I reference the people with whom I want to be in communication (and the conversations of which I want to be a part) and these are mostly drawn from other academics in my fields.

Second, fiction is a little harder to pin down than nonfiction – it is less likely to say what it means and more likely to generate multiple readings. What exactly does Woolf say about our relationships to gender or time in Orlando? Perhaps every reader would have a different view. But then, some of the most-referenced nonfiction seems to have the same ‘problem’. What exactly does Foucault have to say about power in The History of Sexuality (volume 1)? And anyway, does intended meaning matter? Is this what we should be referencing? Or should our references point to the meaning that we took from a text? On reflection, can they ever do anything but this? I frequently find myself cited in ways that surprise me and even to support positions which are the opposite of what I thought I’d said. This disturbed me at first but meanings are unruly and it no longer causes me angst.

I don’t know whether these ramblings leave me anywhere different from where I started. I hope that they can provoke some reflections and discussions about how academics use references to map our thinking and our ideas and at what this reveals and conceals about our ways of knowing.