Racism is one element of sports that leagues all over the world have been trying to eradicate. Despite these efforts, instances of racism continue to pop up in diverse range of sports across the globe, as Aisha points out when she asks “Is it ok to be racist sometimes?”. Sports in the United States are no different in this regard. In this post, guest-blogger Scott Huntington shows that recent history has seen a number of racial controversies in U.S. sports.

One of the most high-profile racial issues currently plaguing North American sports is the saga surrounding Los Angeles Clippers owner Donald Sterling. Following the release of a controversial recording in which Sterling makes racist remarks, the consensus opinion around the league seems to suggest he has no business with the National Basketball Association. 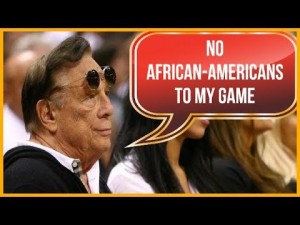 Sterling’s racist comments about African Americans were particularly in poor taste considering the fact that the majority of his team is made up of African-American players. This means that his racist attitude applies to the very players who bring his organization success and financial gains. He’s also been known in the past to raise the rent on anyone that doesn’t share his skin colour.

This concept has led to a wide range of negative feedback being directed toward Sterling. Everyone from famous players such as LeBron James to fellow NBA owners such as Michael Jordan have expressed their distaste for Sterling and his comments.

After a month of resistance, Sterling has finally agreed to drop the lawsuit he threatened against the NBA and agree to the sale of the Clippers.

In taking a look at the National Football League you have another popular North American sport, and yet another major racism controversy. Just as the biggest thorn in the NBA’s side revolves around one franchise, the Washington Redskins continue to create a difficult situation for their league.

The Redskins issues stem from their team name as well as their apparel, as members of the American Indian Movement take offense to these and to their use of a mascot portraying a Native American. They argue that the name itself is an offensive racial slur and see it as poor taste for the league to continue to allow it to be used.

NASCAR (National Association for Stock Car Auto Racing) and auto-racing has been dominated by white people, and has led to several different kinds of racism. Take a look at this Yahoo question where one man named Andrew says he’s a “black dude” who got called derogatory names. The comments are dreadful. One person says “How the hell can you be in Alabama without even thinking to hear racist slurs?” as if being in Alabama excuses the behavior. Another says “With a name like Andrew, I don’t even believe you’re black. Now, if it was Tre-Andrew or Le-Andrew or something like that, it would be a little more believable.”

Thankfully there are places like CJ Pony Parts, a mustang parts company, who are giving back to the community by working to end racism in the world of racing. There’s still a long road ahead though.

The work of one researcher points to ideology surrounding sports as a culprit in recurring instances of racism. She discusses this topic through the lens of fantasy sports, where players are reduced to glorified commodities. Her research on fantasy sports reveals a process in which fantasy owners unfairly judge players in terms of race and scrutinise their performances.

It appears that racism in sports isn’t reserved for professional owners and teams, as casual fans seem to engage in their own instances of prejudice. A brief survey of the current sporting landscape in the United States reveals recurring instances of racism. Despite progress as a society in terms of rooting out racism, the realm of sports still seems to struggle with this issue.

This leaves me with the questions: How does this position young sports fans and players from different backgrounds? How can we support young people of colour who want to engage in these sports?