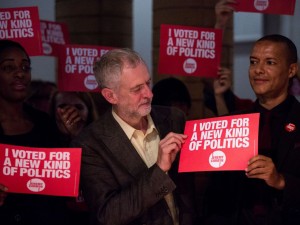 Why is there so little pedagogy in politics (and academic conferences)?

Last weekend I went to an event about democratising the media. I enjoyed this and learnt a lot but after lunch I found myself in a 90 minute session where some one introduced the topic for the first five minutes or so and then opened up the discussion to the room. We spent the rest of the time with people making a series of contributions. Some of the contributions were interesting but I remember very few of them now, less than a week later, and most people remained silent for the entire session. The organisers had obviously given no thought to how to structure the session. I suggested breaking up into small groups to share ideas on the topic and to enable more people to actively engage, but very few people wanted to do this. I suspect the people who supported my suggestion were teachers of some kind.

This reminded not just of the lack of attention to pedagogy among those who organise political events, on the left at least, but also the absence of a wider understanding and discussion of pedagogy among those who are politically engaged. We talk about how schools and universities are organised – their funding, curriculum, staffing and assessment – but only rarely do we debate what goes on inside classrooms.

The lack of pedagogy at academic conferences is even more surprising than at political events given that most of the people there spend a lot of their time teaching. They are filled with bad time keeping, aggressive questions (and non-questions), poor chairing, and sessions dominated by people speaking and even reading papers. Building an academic community has parallels with building a political movement. To do this, conferences need to  be engaging, participatory and inclusive. Some flipped conferences manage this, focusing on discussion rather than presentations, such as Mathematics, Education and Society where papers are published in advance and speakers get just 10 minutes to remind people of their arguments.

Yet bad pedagogies have become deeply entrenched within political and academic communities within ways of working that are hard to shift. They have been destructive to movement and community building and need to change.

In Momentum Hackney, we have developed some principles for organising our meetings.

First, our meetings have a pedagogy – that is the structure should be designed to support learning. Part of this involves avoiding things which evidence shows don’t support learning (such as being talked at for a substantial length of time). But more than this it’s the idea that a meeting, like any learning opportunity, is not just about the content.

Second, our meetings reflect how the movement opened up by Jeremy Corbyn’s victory is based on us all actively developing our political understandings. They are not about experts telling us things but about all of us participating. So speaker contributions have been short (5 minutes) and facilitative (designed to offer ways into a topic rather than to be the focus of the meeting). We have never advertised speakers in the pre-publicity to support this – and we have used lots of Hackney speakers.

Third, our meetings have a theme and aim to come up with action points, but they are also key to building the local group so they are organised so that people meet others, talk with them, share ideas etc. The relationships formed in these meetings can then be the basis for future political action.

Fourth, our meetings are open – they are not based around knowledge we want to give to people, but around ideas we offer to people to explore collaboratively and build a program of action together for Momentum Hackney in which everyone has a stake. We never know where a meeting is going to end but use active chairing to give the meeting direction.

Many thinkers on the left have engaged with pedagogy and many organisations offer guidance on this. Here I have adapted bell hooks’ words as a point of ending and beginning:

Momentum is not paradise. But learning is a place where paradise can be created. The political meeting with all its limitations remains a location of possibility. In that field of possibility we have the opportunity to labour for freedom, to demand of ourselves and our comrades, an openness of mind and heart that allows us to face reality even as we collectively imagine ways to move beyond boundaries, to transgress. This is political education as the practice of freedom.