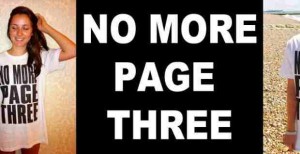 The ‘Page 3′ debate has kicked off again. For those unaware of the proclivities of the UK tabloid pres. Page 3 is a weekday feature in the Sun newspaper consisting of a photograph of topless woman accompanied by a short caption allegedly about her. In the 1980s feminist politician Clare Short attempted to ban this ‘British institution’. Now there’s a new petition calling for the Sun to voluntarily pull the feature. Page 3 has been a route into celebrity for a small number of women from Sam Fox onwards (and you have to love the irony of her later coming out as lesbian) but what has this to do with young people’s aspirations? I explore that in this post but first I need to say something about my own changing position on Page 3.

On Friday night I caught a discussion about Page 3 on TV news magazine show Newsnight between politician and campaigner on women’s issues, Harriet Harman, and former deputy editor of the Sun newspaper, Neil Wallis. Whereas in the 1980s I had no problems unequivocably supporting the anti-Page-3 position, listening to Harman and Wallis fight it out, I found myself having more sympathy for Wallis’ position.

How had this disturbing-to-me situation arisen?

Partly, I’m different now, 42 years-old rather than 16, and as Bob Dylan astutely put it in My Back Pages, numerical age isn’t the whole story:

Good and bad, I define these terms
Quite clear, no doubt, somehow
Ah, but I was so much older then
I’m younger than that now

I’m also no longer a mathematician looking for certainty in knowledge, but a poststructuralist sociologist who likes things as mixed up, muddled up and shook up as possible. I go to conferences like Onscenity where I hear (and agree with) things like: the problem with the anti-sexual-objectification position is that we all want to be treated as a sexual object sometimes.

But partly, the world is different now. With the increasing pornification of culture, naked women are no longer restricted to one ‘respectable’ daily newspaper and some disreputable top-shelf magazines. Semi-clad women are the stuff of mainstream media. So banning Page 3 – while still holding some symbolic value – no longer promises any significant social change. Also the sexual objectification of men has grown, albeit not reaching the same levels as that of women.

I wouldn’t call that aspiration…

Most of all I was troubled by this parting exchange between Harman and Wallis:

Harman: I’m arguing that women should be respected for what they can actually do with their lives. And girls should be able to have higher aspirations than just looking good with no clothes on. Surely in the 21st Century there’s more than that for women.

Wallis: Are you saying that girls shouldn’t have the right to aspire to be a Page 3 girl?

This made me angry with Harman – Who gives her the right to decide what counts as an aspiration and to dismiss the choices of thousands of people?

In Urban Youth and Schooling, a book I wrote with Louise Archer and Sumi Hollingworth, we said:

The Concise Oxford English Dictionary … defines an aspiration as a hope or an ambition. This usefully combines the more concrete and definite aspects of ‘ambition’ (a strong desire to do or achieve something) with the more tentative nature of ‘hope’ (a feeling of expectation and desire for something to happen; to expect and want something to happen; to intend if possible to do something …).

It seems that for politicians like Harman the Oxford English Dictionary definition no longer holds. Instead the word ‘aspiration’ works to value some ambitions and hopes for the future (and the people who hold them) and devalue other dreams and other people.

Would hoping to have a baby count as an aspiration? Would it make any difference at what age the holder of this hope imagined becoming pregnant? Or whether they also hoped to be single or in a relationship at the time?

It is just this kind of valuing of some pathways over others and the relationship of this to the multifaceted and hierarchical domain of contemporary celebrity that we are exploring in this research project. So I hope later in the year to come back to this question of aspiration and topless modelling. In the meantime I’ll end with my own response to Wallis’s question: ‘Are you saying that girls shouldn’t have the right to aspire to be a page 3 girl?’. I would respond with some further questions:

What are the social contexts in which young women aspire to work in topless modelling? Are there other options open to them should they want them?

What impact does young women’s right to aspire to be a Page 3 girl have on the sexual rights of other women?