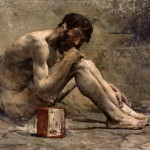 A number of suggestions came to mind, but why not turn the question round and ask: What is the best way to leave the profession?

This connects with my current work in which I am considering the revival of ancient Cynicism, a lived philosophy whereby the Cynic bears witness to his or her critique by acting it out.

If teachers (and academics too) are to abandon the profession, could this act of departure not be used to better express the widespread conviction that there is something fundamentally wrong about education today?

Diogenes, so the story goes, was instructed by his oracle to ‘change the value of the currency’ – a phrase inciting subversive if not criminal activity. This phrase defined the life of the Cynic, referring to the position a Cynic takes in relation to any social convention in circulation. The Cynic would attempt to break with convention, leave this life for another and live according to a different system of value. By contrast, those educators leaving education today tend to do so with their system of value intact.

The Cynic operated by generating a public scandal of a kind that confronted its public with its own hypocrisies. This involved considerable discomfort for the Cynic concerned who faced the inevitable backlash.

I think that we are not sufficiently, deeply, scandalised by what goes on in the name of education today. Hence I wonder if – in order to sensitise us to what education is – those leaving the profession could do so by way of a scandal.

This would not be the kind of scandal that allows its spectators to fall back on existing systems of judgement (that are most painfully and predictably expressed in the tabloid press and much other media besides). Rather, I have in mind a kind of scandal that we would find difficult to categorise at first, which would bring into question our basic attachments to education.

I am not sure what, precisely, one would need to do to qualify for such a scandalous act. Indeed by definition this remains to be seen. But I do think that exiting the profession offers an opportunity to say something important about education that goes beyond the valedictory media piece written by the embittered teacher who remains committed to the very thing she abandons, or at least to an idealised image of it (for this commitment justifies her departure). This kind of departure leaves so much about our educational commitments unquestioned.

I think those remaining ‘in’ education could live a little more scandalously too. But here I must be specific. Cynics have been widely misunderstood as if they expressed nothing but simple insolence, or at best a form of, what Louisa Shea terms, ‘existential self-assertion in the face of annihilating power’. The Cynic did little but give vent to his libidinous energies; the Cynic protest was just a barbaric cry, a futile plea for freedom; or so it goes.

But Cynic rebellions were not at random. They required considerable self-discipline and were situated with care. They were designed to express those ‘principles to which society pays lip service’, so as to render them bare, if not twist and contort them, in an attempt to refashion how we are fashioned as self-asserting subjects wedded despite ourselves to those systems that define our being. To revive Cynicism, and to leave education, is far more difficult than it first appears.

Ansgar Allen is a Lecturer in Education at the University of Sheffield and author of Benign Violence: Education in and beyond the age of reason (2014, Palgrave).