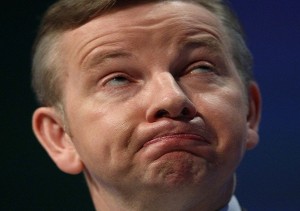 The – not so subtle – message of the Telegraph article is that working-class culture is inferior and that everyone should be middle class because it is ‘the best’. This message is disguised within the text through blaming the working classes and their culture as a barrier for young people in their attempts to reach university, making them feel that they won’t fit in. The underlying point has some truth to it, indeed a large body of literature in the sociology of education has shown that working-class young people might not apply to ‘elite’ institutions due to a perception of them as ‘not for people like us’ (see for example, work by Louise Archer, and Diane Reay). Or, if they do go, they commonly experience problems with coping in this environment. However, the Telegraph at least seems to have missed the point.

The ‘solutions’ to these feelings of not belonging that are offered in this piece are morally problematic – presenting working-class kids ‘deficiencies’ as an explanation for a lack of social mobility, just as Gove has done in many of his comments on education, social class and ‘mobility’. They are also totally nonsensical and far removed from the realities of poverty in Britain. The article comments that: “Children from poor homes need help to change the way they eat, dress and conduct personal relationships to get ahead in life”. Such statements neglect recent headlines regarding the massive rise in the number of families using food banks, which suggest that more urgently the government might want to focus on ensuring that working-class children can actually get access to food, rather than instructing them on how to eat. This point aside, what is overlooked here is the fact that these middle-class practices (eating at restaurants and visiting the theatre) are not simply ‘lifestyle choices’ or signs of moral character that are on offer to all young people. They are explicitly tied to money and access to other resources that are unequally distributed.

A recent post by blogger Michelle Brook on her experiences of being from a working class background and attending Cambridge was the source of inspiration for Brandt’s piece (which led, in a mad turbulence to this ridiculous propaganda by The Telegraph). Michelle writes:

Those of us who leave our backgrounds behind have to cope with not really fitting in where we are now, but growing in a way that makes it hard to fit in where we came from. We have to prove ourselves to ourselves repeatedly, reminding ourselves that we can belong here. Being surrounded by others who don’t seemingly understand that experience makes it even more difficult for us. There needs to be more of us who are willing to talk about our experiences, and we need to make sure the conversation about equality doesn’t just end on formal education.

Michelle’s message – which seems to have been lost in a flurry of right-wing tabloid babble – is that we need to make visible this invisible group: talk about us, make us feel comfortable and, most importantly, feel normal rather than lacking or inferior. Her point is not however – as the Telegraph have interpreted – that we must become ‘more middle class’. 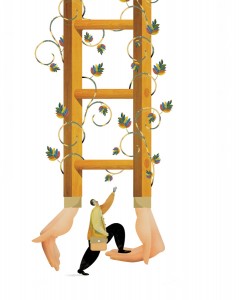 From my experience of being a working-class student attending an elite university I was struck by how fearful and narrow the Widening Participation (WP) department and its associated policies seemed to be. I remember being in a departmental meeting on WP and staff discussing the perplexing issue regarding why certain departments (namely Social Policy) were so good at getting  students from non-traditional backgrounds into the university. They pondered what could be done to ‘pinch’ these WP students and get them to study Sociology instead. It was at this point that I realised the focus of WP departments is deeply problematic: it is about access and access in the broadest sense, in the ‘pinching other students’ sense.

As the meeting progressed and I made my suggestions, I begun to realise that they were scared, scared of labeling anyone as a ‘widening participation student’. Widening participation seemed (and still seems) to stop at getting more students from disadvantaged backgrounds into university. It’s about increasing the numbers as though simply creating a more ‘diverse’ student population equals a more socially just and equitable system. This is not surprising since there are no incentives from ‘the powers above’ to do any more than this. However, it is totally absurd and perhaps goes some way to explaining why those of us who make it to elite universities feel so uncomfortable there, why some end up dropping out, and why some never even apply in the first place. These ‘elite’ institutions look so unwelcoming and unsupportive. 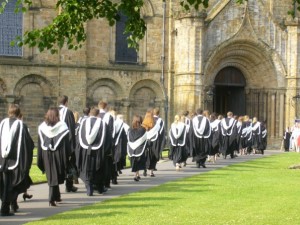 I argue then that what is needed to promote ‘social mobility’ is not for the working classes to ‘become middle class’, but for middle-class institutions to become more welcoming and accepting of working-class culture. I have argued many times – and will continue to do so – that there is a need for universities’ widening participation departments to act as a network for their students, to provide a space where they can feel comfortable and find people in similar situations. We need to stop pretending that everyone in the university is middle class – or should be. I for one would like to stand up and be counted and offer support for those just entering the middle-class world which Michelle describes as a: “scary place, full of unwritten rules that are alien to someone coming from a background where survival is paramount”.

I now realise how lucky I have been, in that academics from working-class backgrounds have been my rocks, they have sought me out and others like me and nurtured and supported us. They have shown us through example that it is okay to be working class and to occupy middle-class worlds such as universities without changing yourself (too drastically) to fit in. They have provided a place to go, where there is a shared understanding, where there is no need to attempt the dinner conversations about skiing holidays and ponies that Michelle discusses.

Suggesting that working-class students need to become middle class culturally in order to fit in at university is like suggesting that Black students should become ‘more White’, or that women should behave like men. This seems to me to be the wrong way around. Our universities need to recognise how they exclude others. It is universities that need to change – to become less middle class, masculine and ethnocentric in their practices to accommodate their diversifying population, rather than force everyone into the same homogeneous box.

Jessie Abrahams is a first year ESRC funded PhD student at Cardiff University looking at the effect of the increased tuition fees in England on young people from different social class backgrounds and their perceptions of the possible in such a context. Prior to this she was a research assistant on the Leverhulme Trust funded research project ‘Paired Peers’. The project qualitatively followed a cohort of 70 students throughout their undergraduate degrees at the University of Bristol and the University of the West of England. She is also a co-convenor of the BSA Bourdieu study group.