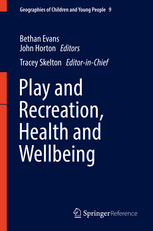 Through the CelebYouth research, we have been exploring how celebrity talk is a way that young people play with their identity. Our most recent publication is a book chapter looking at how celebrity provides cultural resources that young people can, as Mary-Jane Kehily and Anoop Nayak put it, “talk with” and “think with’’. In the chapter we give three examples of how young people draw on celebrity as they negotiate and navigate transitions.

In this post Heather provides a taster of the chapter by looking at one of those transitions: age and maturity. We hope that, if you want to read about the other two – gender and sexuality and social status – you’ll encourage a library to buy the book: Play and Recreation, Health and Wellbeing. We are sorry that it’s so incredibly expensive. All our other publications are Open Access and the CelebYouth book (out in 2017) will be an affordable paperback.

The dominant view of age is chronological, a simple measurement of one’s time on earth that is associated with a biological and psychological process of growth. However, social researchers have widely critiqued this idea of age as ‘natural’ and ‘developmental’. For example, Nancy Lesko pointed to the social regulation of age via schooling, legislation and widespread expectations about what is normal and appropriate at different ages. Dominant ideas of childhood and adolescence normalise some  young people and construct those who do not fit as different and ‘Other’, whether they be the starving African children who feature so often in charity advertising or the closer-to-home teenage mothers who ‘grow up too fast’.

Using this approach, it is meaningless to attempt to understand what childhood or adolescence really is, for each is a product of the stories we tell about it and the meanings we make of it. In the CelebYouth data, growing up happens through young people’s celebrity talk, as they negotiate their transitions from childhood, through adolescence, to adulthood.

Distinctions between old and young pervade the data, with our 14-17 year-old participants constructing themselves as in-between, simultaneously both part of a young generation and as more mature than children and tweens. In a rural school, there was a rich discussion contrasting ‘our generation’ with ‘the older generation’, including this extract from two 16-17 year-olds:

Joe: The older generation has mucked it up for our generation. …
Joseph: Because they think they know best, they think that we are too young and too unpredictable. But in reality they’re losing their grip. They’re starting to like lose what they are good at, because they’re not young any more, like us. … So like some older generations do step aside for the youngers, and … they’re open to what the younger people say, and that kind of stuff. But others are just so tight up, and wound up in their own ways. 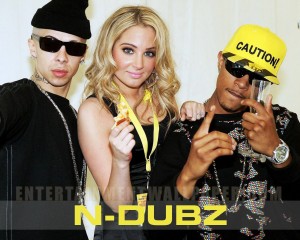 Although, Joseph admits to diversity within the ‘older generations’, there is a clear generational difference within his talk, and a demand that the failed older generation ‘step aside for the youngers’. Celebrity taste is a way in which this difference between young and old is constructed. For example, one young person talked about her admiration for British hip-hop group NDubz to establish this difference and to position herself as young: ‘Older people don’t like them because of the reputation they have and stuff. But … I think they’re good’.

Similar positioning happens through talk about ‘older’ celebrities. For example, Take That, a boyband who had their heyday in the 1990s, were dismissed as ‘so old’  and a young woman, explaining why she no longer fancies Hollywood actor Orlando Bloom, said, ‘I don’t know whether it’s the stress but he looks really old now’. Alongside this distancing from older celebrities, there was a sense of closeness and intimacy evident in the participants’ talk about those young celebrities with whom they had grown up. As Jake said of actress Emma Watson ‘I’ve watched her in Harry Potter my whole life’.

Youth operates socially as a space of transition between childhood and adulthood, between dependence and independence, play and work, immaturity and maturity, childish irresponsibility and adult responsibility, vulnerability and strength. So participants also constructed themselves as older than other people by talking about those who were more dependent, playful, immature, childish, irresponsible and vulnerable than themselves. Thus, they showed concern to protect children and to critique contemporary taste as ‘going to be like totally irrelevant within like 15, 20 years’. Both these elements were apparent in their discussion of younger people’s vulnerability to contemporary celebrities, following the tendency to locate media influence away from themselves.

Although they discussed both ‘good’ and ‘bad’ influences, the most energetic talk focused on the bad. As Dumbledore complained, ‘I know full well that there’s people who are 11 or 12 or 10, or 9, or 8, cos they’ve all said to me stuff like this, they would be quite happy to go off and marry a footballer, because that way they’re rich and trampy’. While this may be derided by Dumbledore, it is presented by him as normal for those who are younger.

In one group interview, Alison remembers ‘age 13, the Jonas Brothers’ Inception, that like took over my life. I would just sit there for hours on a computer just looking at pictures of them … and now I’m like “I hate them so much”’. Alison produces herself as mature by locating her obsession with these Disney popstars in the past. Rick underlines the message that you are required to grow out of such things by concluding with a warning that: ‘Some people don’t grow out of it’. In another group, Nishaan speaks about his current age as being one of work, positioning celebrity as for younger people who can still afford time to play: ‘this stage of time, … you’re mostly like focusing on all your work you’ve got … You don’t really care what a celebrity does’.

Most of the references to those younger people who are influenced by celebrities were implicitly or explicitly to girls drawing on the idea of female vulnerability. Indeed, in only one case were boys identified as being specifically prone to celebrity influence, being lured by the promises of extreme and easy wealth attached to becoming a footballer. That gender and age are embedded in this relationship to celebrity is made explicit in the term ‘fangirl’. Defined by the Urban Dictionary as ‘a rabid breed of human female who is obsessed [sic] with either a fictional character or an actor’, this term was used often by young people in our data.

Interviewer: Is there a male equivalent for fangirling?
Dumbledore: Men don’t tend to do it. [laughter]
Julia: No.
Jinny: It’s like or Justin Bieber, One Direction, 12-year-old-girl fans. …
Dumbledore: You know Justin Bieber, a photograph of him having a joint [appeared] something like that and then, because his fan base is made out of like 13-year-old girls, they’re all going ‘aaargh!’ 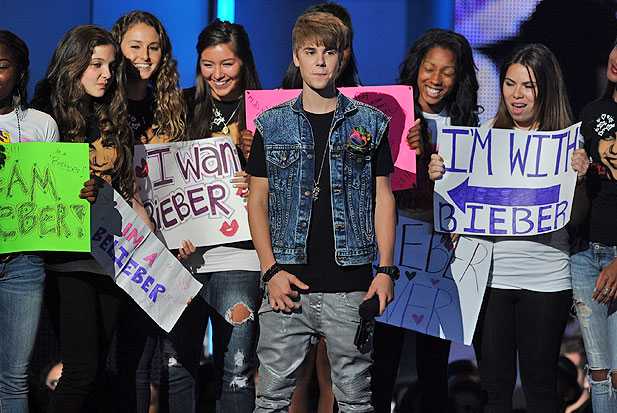 This talk is part of a wider pattern where we can see young people’s concern to distance themselves from Bieber and One Direction, as this offers a way for them to conform to age-appropriate tastes.

In such celebrity talk we can see growing up, moving from youth to maturity, happening through social practices rather than as natural development.