At this year’s Oscars, a number of acceptance speeches received notable commentary, many for their ‘politicised’ nature – from Lupito Nyong’o’s dedication to the slave Patsey she played in the film Twelve Years a Slave (‘It doesn’t escape me for one moment that so much joy in my life is thanks to so much pain in someone else’s’)  through to the film’s director Steve McQueen’s reminder of the millions still in slavery, and Jared Leto’s claiming solidarity with both AIDS victims, and the citizens of Venezuela and the Ukraine. Meanwhile, Cate Blanchett used her speech to call attention to the lack of ‘meaty’ roles for women and a plea to the industry to stop ‘foolishly clinging to the idea that female films, with women at the centre, are niche experiences’.

We were both struck and perplexed, however, by another acceptance speech – that delivered by Matthew McConaughey in accepting the award for ‘Best Actor’ for his role as AIDS activist Ron Woodroof  in Dallas Buyers Club. This award marks the success of  The McConaissance’s transition from king of the romantic comedy to ‘serious actor’.

The speech is worth listening to in full via the video above but in brief, McConaughey said that he needs three things in his life to survive:

In what followed, McConaughey thanked God and his family and then turned his attention to who he looks up to as a hero.  The first divine ‘inspiration’ comes as little surprise to those familiar with the actor, and indeed is perhaps a common trope in American acceptance speeches. Family also features regularly in celebrity speeches – a reminder of the personal (and ‘ordinary’) self behind the star image.  McConaughey brought these together as he paid tribute to his late father ‘who, I know he’s up there right now with a big pot of gumbo. He’s got a lemon meringue pie over there. He’s probably in his underwear. And he’s got a cold can of Miller Lite and he’s dancing right now’. As he says this McConaughey moves around like his father, his words and actions emphasising his Southern roots. In the image of his father’s pot of gumbo, plate of pie and can of beer we are assured of the star’s authenticity and ‘humble’ beginnings. He’s just like us. Indeed, that it is Southern roles that have been the basis of his transformation into a serious actor attests to the authenticity of his transformation.

Yet it is the third figure in this list that is most fascinating. Talking about his hero, his ‘someone to chase’, McConaughey referred to his ‘future self':

So how do we make sense of this? Why did it disturb and perplex us? Here are a few thoughts. We’d love it if you told us what you made of it in the comments below. 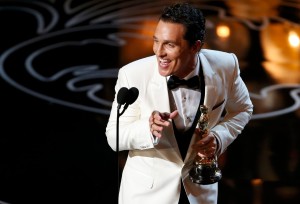 First, it strongly embodies neoliberal discourses of aspiration where investment in the self is paramount. The thing is to keep on striving and improving: even if you’ve won an Oscar, you are and can never be good enough. Indeed one must prove oneself through showing investment in always wanting to do better. As Nikolas Rose says, ‘each individual must render his or her life meaningful as if it were the outcome of individual choices made in furtherance of a biographical project of self-realization’. This is similar to Will Smith’s success philosophy based on ‘sickening hard work’ and relates to how the young people to whom we spoke stressed the value not just of hard work but of dedication, never giving up and always learning.

In this focus on his future self as his hero or role model, McConaughey suggests that we need to – and should –  ‘keep on chasing’ rather than ‘making do’ or being happy with your lot (even if it’s a great ‘lot’). Here happiness figures as something to be worked at rather than happened upon and the self appears as an endless project – a site of continual reinvention and refashioning, of, as Michel Foucault put it ‘care of the self’. Indeed, as we noted above, this is key to his stardom, transformation and the figure of The McConaissance.

We also wondered if there’s something gendered going on here. Generating very little criticism – and indeed a lot of praise – McConaughey seems to be allowed to get away with this self-congratulatory register, perhaps because his persona emphasises his quirky off-beat style. We know that if women talk ‘too’ positively or confidently about themselves, they risk being seen as smug or self-obsessed. So, would a female actress be able to get away with this we wonder? Anne Hathaway’s past acceptance speeches generated an infamous ‘backlash’ and associations of arrogance and faux humility.

Even given his gender, this speech could  be read as narcissistic, especially in comparison to the other speeches this year which were praised as political statements and which acknowledged less fortunate others. Indeed, in one of the many, many articles on Lupito’s speech, we see her humility celebrated as both rare and authentic rather than merely professed and projected:

It doesn’t escape her for one second that her current joy directly stems from someone else’s pain. She does make the standard industry thank-yous to cast, crew, and family members, but she chooses to preface all of that with a lengthy dedication to the person whose story she told on screen. Later in the speech, she said she could feel the presence of the dead. Lots of Oscar winners try to project humility, but usually that professed humility is in relation to others in the film industry—not in relation to all of American history.

But does McConaughey’s speech about always chasing his future self represent something more complex than merely signs of the actor’s narcissism and self-satisfaction. We wonder if this projection of his future self as something to always be striving towards performs an important social function which produces him not as arrogant or above his station, but rather, as ‘like us’. McConaughey appears both ordinary and extraordinary. Being grateful but not yet (or indeed ever) happy with his lot, he appears both closer to us and deserving of his privilege, simultaneously dissolving and legitimating the gaping inequalities between us and the elite of which he is part.