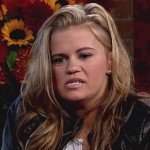 For Imogen Tyler and Bruce Bennett, a female ‘celebrity chav’ is someone who has failed to perform femininity ‘correctly’. Whilst feminine middle-class celebrities radiate elegance and sophistication, the (un)feminine working-class are represented as vulgar, common and crude. According to Beverley Skeggs, this vulgarity is presented through “unruly… bodily functions”: weeping, leaking, grotesque bodies. Katona embodies this on her reality shows, when she is regularly filmed burping and flatulating without restraint. She was filmed in the bath, announcing to the camera “I could force one out now… [d]’you want me to?”. Her disregard for social taboos and ‘politeness’ insinuates that her body is in excess of disciplinary feminine ideals. Rather, Katona communicates disgust and working-class excess. She cannot govern her ‘leaking’ body; her working-class status is oozing out despite her celebrity status, wealth and fame.

Meanwhile, Cole’s elegant fashion choices led her to be named ‘best dressed woman’ of 2009 by Tatler magazine, a society publication focusing on the lifestyles of the upper classes. Her gradual shift into style icon status is one of the key ways she has managed to transgress her working-class roots: she has transformed from ‘chav to chic’ before our eyes, draped in £20,000 designer dresses and millions of pounds worth of jewellery, a million miles away from the tracksuits and ‘chavvy’ hooped earrings she favoured in the early days of Girls Aloud.

Cole’s evolution from ‘working-class convict to A-list celebrity’, as the ever-decorous Daily Mail so eloquently phrased it, seems to have been largely based on the procurement of restraint, and of modesty: the control of ‘working-class excess’. Cole always follows the current fashion trends, her wardrobe being carefully mediated by a stylist: one of the many directors on her road to ‘acceptable’ fame. Furthermore, she has come to be associated with being ‘glamorous’; a word Beverley Skeggs believes configures being sexually attractive within ‘acceptable’, middle-class guidelines. Even though she is desired by many, her attractiveness does not make her unfeminine as fecundity does to working-class women, rather she is the woman men would like to marry (and if Justin Bieber says it how can it possibly be wrong!?).

Katona, meanwhile, is the sheer embodiment of working-class excess. Even aside from her bleached blonde hairdo and a penchant for leopard print (often cultural signifiers of the working class), she often wears clothes which exhibit her sexuality, such as a low-cut top displaying her cleavage on breakfast television. It is the image of her excess skin which positions her in opposition to middle-class modesty and refinement.

Katona’s place as a celebrity chav is particularly interesting in relation to her appearance on the show My Fair Kerry (2005). Here, Katona was coached to become ‘a high society princess’; essentially, she was shown how to become  ‘properly’ feminine. Coached by a team of ‘experts’, Katona was taught airs and graces in the aim of transforming her into a lady, as opposed to the ladette she was previously. The entire narrative of this show is based around ideas of improvement, of passing as somebody different – in this case, someone (apparently) better. The show constructs working-class-ness as something which must be expelled to make someone ‘right’ – a person of value.

Whenever Katona exhibits behaviours which are associated with the working class, the upper-class coach experts and ‘judges’ shake their heads in disgust.

While the further Cole retreats from her working-class roots, the more famous, and increasingly well renowned she becomes. It was at the moment she became the ‘expert’ judge on X Factor that she gained her status as the ‘people’s princess’, after all. Cole’s ‘correct’ presentation of femininity, and the control she exhibits over her body and manner, separates her from her working-class past. 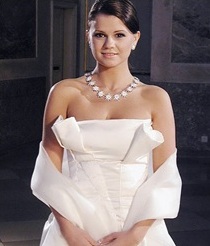 Katona, meanwhile, has never actively distanced herself from her background. Even her appearance on My Fair Kerry, allegedly to turn her into a ‘lady’, was effectively a performance, showcasing her working-class-ness, with the entertainment coming from the juxtaposition between her and her upper-class guides. Katona’s refusal to perform ‘correct’ tropes of femininity, to control her unruly body, has meant she has failed to distance herself from her working-class background, and she is punished brutally for it. The press do not reward her for remaining ‘authentic’ and loyal to her roots; rather, they actively vilify her for failing to fit with the middle-class celebrity norm. In contrast, Cole’s story exemplifies the ‘rags to riches’ ideal, prime fairy-tale material, hence her ‘princess’ moniker. This happily-ever-after story is rewarded, as Cole rises from the grimy label of ‘convict’ to the heady heights of A-list celebrity. There is, apparently, little room for someone like Katona within the social circles that Cole is welcome to. Just look at the recent vilification of Tulisa, as soon as she dares change out of the designer dresses given to her by X Factor producers, she’s back to being the ‘Queen of Chavs’ (and this was before the recent drug scandal).

Where Cole presents a success story of social climbing, Katona highlights the flaws in the system, and the problems with such idealistic notions of Disney-esque life stories. Katona reminds everyone of the existence of a working-class culture many would rather forget about, and she becomes a figure of intense mockery as a result. However, these ‘rags to riches’, ‘gutter to the stars’ storylines are precisely one of the ways in which newspapers and magazines and TV production companies make money out of these celebrities, which they create for profit. As the rise and fall of Tulisa Contostavlos makes clear, no women of working-class origins are safe in positive celebrity status, but can be brought down as quickly as they rise in what is, after all, a global entertainment, for-profit business.

Laura Clancy has just graduated from Lancaster University with a BA in Media and Cultural Studies, and is going on to a Masters later this year in Gender & Women’s Studies and Sociology, with the aim of completing PhD afterwards. She is interested in issues surrounding celebrity, femininity, masculinity, social class and culture. You can follow her on twitter at @Laura__Clancy.