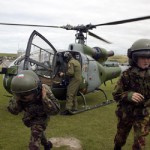 In the wake of the killing of a British soldier in Woolwich on Wednesday, mainstream media and policy discourse has been saturated with sensationalist, racist and Islamophobic language, much of which is directed at young Muslim men. This article by Toby Young, which calls for ‘military-style free schools’ to ‘prevent disaffected Muslim youths from falling into the hands of Islamist hate preachers’ falls into this category. Toby’s comments come quick on the heels of Gove’s recent speech in which he argued for an increase in the number of cadet forces in state schools. In this blog post, Laura explores the assumptions behind the Conservative rhetoric about the role of cadet forces, and the armed forces more widely, in state schools.

‘Your son says he wants to spend more time with one particular group of friends. Which would be more inspiring – because he wants to improve his pool or because they’re in the cadets and he wants to join?’ – Michael Gove, 9th May 2013

I admit it. I have something of a morbid fascination with Michael Gove’s speeches. There is something about the rhetorical sleight of hand and doublespeak that draws my eyes over to look at the damage. These speeches are ideological works that weave a story about education that demonises teachers, unions, parents and young people with one hand, while removing jobs, benefits and services with the other.

Reading Gove’s rhetoric after a day of interviews with young people, I was reminded of the revolutionary theorist Gramsci, whose ideas have become quite popular with neoliberal speechwriters in the UK (as Heather explores in her critique of another of Gove’s speeches) and US (at a recent conference I heard that Republican Carl Rove asked his aides to read The Prison Notebooks but can’t find reference to this anywhere online – answers on a postcard). Gramsci argued that power in society was not only maintained through violence, but also gained through consent, by the circulation of ideas. Certain ideas come to become seen as ‘common sense’ – as ‘natural’ or ‘inevitable’.

“Cadet Forces teach our young people vital skills such as teamwork and discipline. They provide them with huge opportunities, open up new horizons and new possibilities.

That’s why I want to see more of these in our schools so that we can give young people no matter what their background the skills to succeed.”

The rhetoric surrounding the expansion of CCF in state education rests on some of the same assumptions as the policy discourse surrounding the ‘Troops to Teachers’ proposal, which Heather Mendick has questioned over at Gender and Education Association and Esther Dermott has analysed in a paper for Critical Social Policy. This is also echoed in Gove’s recent proposal for state ‘military style’ schools, which was in turn been taken up by Toby Young in response to the killing of a British soldier in Woolwich on Wednesday. The armed forces, specifically as a provider of male ‘role models’, are positioned as potential sources of discipline and inspiration for young people. By engaging in military exercises, drill, and working in a hierarchical organisation, Gove sees cadet forces building ‘character’ and instilling ‘discipline’. This fits within a broader emphasis on ‘character building’ and ‘resilience’ in education policy and in neoliberal political and cultural discourse.

Young people at state schools are thus constructed as problematic subjects, in need of the steer of a firm and disciplinary hand in order to achieve their ‘promise’. This rhetoric reinforces dominant narratives of working-class young people as unruly, undisciplined and out of control – the kinds of stories that proliferated in the mainstream media reporting of the riots in England in August 2011 (Reicher and Stott take a critical view of this in their 2011 book on the riots). This discourse is often gendered, classed, racialised and Islamophobic, with young working-class black and Muslim men in particular demonised in mainstream news reporting and policy discourse. While the extreme end of the spectrum includes articles like Toby Young’s and David Starkey’s infamous racist comments on Newsnight during the 2011 riots, mainstream news reporting is infused with this rhetoric. Take the following sentence from The Guardian yesterday:

“Shouting the justification of al-Qaida-inspired jihadists across the world, the tall black man, dressed in the dark clothing and beanie hat of urban south London, spat his words to an eyewitness filming on his mobile phone”

A picture is painted, in such rhetoric, of unruly and dangerous young men all over the world. The ‘jihadist’ is drawn alongside familiar cultural reference points used when demonising young working-class black and Asian young men.

The expansion of CCF in state education is presented as a solution to a young generation ‘in crisis’. The problems young people face in terms of access to employment and education are positioned as problems of will – if only they had the right discipline then they would make the right choices and thus be on the way to the right kind of ‘success’. As we have argued elsewhere on this blog in relation to speeches made by Gove and Cameron, this Conservative vision of ‘success’ and the ‘right’ kinds of imagined futures for young people tend to focus on their ability to participate in the labour market in specific ways and spend their wages on property. This neoliberal rhetoric presents those who do not aspire to these kinds of futures as deficient.

Gove’s comments about ‘our son’ and his ‘group of friends’ quoted above are part of this construction of young people’s as ‘deficit’ subjects. Playing pool with friends is placed in opposition to joining the cadets: through the speech we are invited to see the cadets as the ‘inspiring’ option, the ‘character building’ one in which young people ‘shape up’ rather than simply ‘hang out’. It is significant that Gove chose pool (rather than, say, rugby or tennis) as the sport which symbolises ‘low expectations’. As Kim argued, Gove’s speech is filled with gendered and classed assumptions about the relative merit of various cultural practices.

Ester Dermott draws on Connell’s work on ‘protest masculinity’ to look at how rule-breaking by young men is positioned in the policy discourse around the Troops to Teachers programme. She argues that young working-class men’s behaviour is constructed as problematic, with military discipline and role models posed as the ‘solution’ to boys’ perceived under-achievement and troubled behaviour in school. She argues:

“Troops to Teachers aims to civilize ‘protest masculinity’ by subduing its worst excesses, thereby creating a socially acceptable space in which a ‘macho/hard’ status can still exist.”

I would argue that something similar is going on in the positioning of cadet forces as producers of ‘good character’ and ‘success’. Militarised masculinity is constructed as socially useful, contained within certain boundaries of control through discipline. Such rhetoric can also be seen in recruitment for the armed forces, in which potential recruits are invited to ‘be the best’ and aspire to live a ‘life without limits’ – for example this recruitment ad in which a young man leaves jobs that are shown as mundane and unfulfilling for a life of excitement, challenge and adventure in the Navy. Indeed, the cadet force itself is a key source of new recruits for the armed forces.

As Heather has pointed out, the representation of military ‘solutions’ in schools also positions teachers as a problem – presented as unable to maintain discipline, with ‘the problems in our schools and on our streets as caused by progressive, child-centred, liberal education, which has gone too far.’ This is a familiar theme in Gove’s construction of teachers and unions as ‘enemies of promise’ for opposing his regressive education policies.

The assumption that military discipline is a self-evidently ‘good thing’ for young people should be interrogated. Education should not be about ‘following orders’, but rather critical thinking.

I am not suggesting of course that young people involved in the cadets automatically accept authority obediently. However, one of the central aims of military training is to foster a willingness to follow orders. My secondary school was one of the few state schools with a CCF, and I joined the RAF section. Taking part in the cadets certainly gave me the opportunity to do exciting outdoor activities. However I also clearly remember activities like crawling along the floor picking up dirt and fluff, hours of drill and learning the ‘right’ way to buff a shoe. Those who tried to quit cadets during term time (signing up was voluntary but you could only leave in certain weeks) would be put in detention with the stern Colonel in charge.

The involvement of military in schools is positioned as a way to reduce violence, but the violence and reality of war is totally obscured in smooth rhetoric about ‘discipline’ and ‘character’. This ‘character building’ discourse also fails to recognise that the military can be a very dangerous place for many, as reports of homophobia, abuse and rape highlight. For example, the recent documentary The Invisible War highlights the extent to which rape is covered up and the struggle for justice by survivors in the US military (trigger warning for rape for the video trailer linked).

The military exercises we took part in were like simulated battle – in fact the moment I decided to leave was when watching a recruitment video of a military exercise in which cadets who had been successfully ‘ambushed’ by (blank) gunfire were play-acting dying. Of course my own experiences don’t speak for the many young people involved in the cadets or considering a career in the military. I don’t dispute the value of creating opportunities and resources for young people to get together, learn new skills and spend time outdoors.

However, Gove’s rhetoric shows that the government’s interest in cadet forces isn’t about ‘opportunities’. By focusing on the ‘need’ for military discipline in ‘failing’ schools and among ‘failing’ youth, Gove reinforces his attack on teachers and young people as ‘deficient’, directing attention away from the heavy impact of cuts to youth services and welfare, and presenting his vision of education as a place where young people learn to be compliant, rather than critical, members of society.