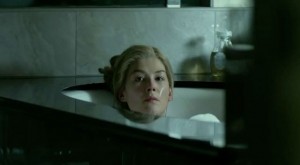 It’s great sharing a Twitter account with Kim and I very rarely have a problem with anything she sends out, but I do radically disagree with her tweets about Gone Girl: “Saw ‘Gone Girl’ last night- really didnt like it. Main female character just a misogynistic cliche, strong anti-feminist tone. Thumbs down” and “Gone Girl is reminder that lots of people in Hollywood really hate women”.

I went to see the film expecting a did-he-or-didn’t-he plot about whether Nick Dunne, played by Ben Affleck, murdered his wife, Amy, played by Rosamund Pike. The film quickly turns into something much more disturbing and, for me, more interesting. To avoid spoilers I’ll just say that, through flashbacks and other devices, we find out that Amy is more than a victim and is an expert manipulator of men and women. In short, she’s a classic femme fatale. I’m not sure whether I should admit this in public but I love watching such women on the screen as they exploit everyone they meet, especially the men, kill without scruple and have sex for pleasure and control but never for love or emotion.

My first encounters with femme fatales were modern figures like Kathleen Turner’s Matty Walker in Body Heat and Linda Fiorentino’s Bridget Gregory in The Last Seduction. Below, you can watch the scene where Bridget enters a small town bar, orders a Manhattan, refuses to say please, and then feels up the guy who’s under the illusion that he’s chatting her up, because she never buys anything “sight unseen”.

It was a little disappointing when I went back and watched the early film noirs from the 1940s and 1950s and realised the Hollywood production code meant these women had to die at the end. Matty and Bridget end their films not just alive but triumphant.

Yet the problem with reading the femme fatale as a stereotype of feminine evil, as a symptom of male anxiety, or as a catchphrase for the danger of sexual difference is that it treats this … feminine heroine as an encoded figure who exists only as the phantasmic emanation of others, who is acted upon and, when necessary, extinguished, rather than treating her as a separate subject who has agency and is responsible for her decisions. In so doing, feminist critics unwittingly imitate precisely the gesture of fetishism performed by Walter Neff at the very beginning of Double Indemnity, when he fixes his gaze on the golden bracelet Phyllis Dietrichson is wearing around her ankle, rather than acknowledging her as a separate human being. … However, one might ask: what if, rather than treating her as a fetish, projection, or symptom, one were to treat her instead as the subject of her narrative? … What would it mean for us to put a stop to the series of turnings away which revolve around the femme fatale, to abdicate the gesture of fetishism, which supports the refusal to see her as a separate human being and the refusal to accept her difference?

So, instead of turning away from Amy by dismissing her as a symbol of misogyny, we should treat her as the subject of her own narrative.

And Amy does get to author her own story to much greater extent than perhaps any previous femme fatale – she has her own flashback voice-over provided by a diary, and a brilliant angry monologue about how women turn themselves into objects for for men. As the film progresses, Nick loses all agency as his life increasingly turns into the one Amy has written for him. All these blogs and articles about Amy, whether pro or anti, attest to how captivating and compelling she is. Rarely do any female characters in films provoke such intense debate.

Despite the focus on her, Amy isn’t the only woman in the film. In most noirs, we get just a femme fatale and a dull ‘good girl’ to contrast. Gone Girl has lots of diverse female characters, including the senior detective investigating Amy’s murder and Nick’s twin and best friend Margo, two roles that noir usually assigns to men. As a result most of the conversations take place between men and women. It’s incredibly rare to get a mainstream Hollywood movie that passes the Bechdel test (by featuring two named female characters who talk about something other than a man) and fails the reverse Bechdel test (by not featuring two named male characters who talk about something other than a woman). Yet, it seems that even these other women cannot free Amy from the social demand of having to stand for all women and cannot help us to see her as a separate human being on her own terms.