The team have now started collecting data on our 12 case study celebrities. Over the next six months we will be collecting data from an array of sources – including Twitter, Facebook and national newspapers – as we track the media representations of our case study celebs and discourses of aspiration within these.  We will also be analysing other supplementary texts that appear to be central to their celebrity image and ‘back story’ including their autobiographies, documentaries, and their TV shows, films or music. As Heather recently reported, these additional sources are wide and varied – culminating in a rather bizarre but completely legitimate Amazon order from Brunel University. In this post, Kim makes some emerging observations from the case study data collection, and remakes on the inescapability of one celebrity in particular.

Tracking how these celebrities are constructed (and construct themselves) across a range of media platforms is proving to be fascinating. ‘Celebrity talk’ about our case study celebs on online social media platforms like Twitter gives us an insight into the on-going construction of celebrity: the active, participatory and on-going circuits of meaning making in which we, as consumers of celebrity (and even as ‘non-consumers’), contribute to. For some of our case study celebrities – like Nicki Minaj and Kim Kardashian – reading Tweets about them is not an easy task. Indeed, these celebrities in particular appear to attract a significant degree of online vitriol – what Emma A. Jane usefully refers to as ‘e-bile’ in a recent paper in Feminist Media Studies:

“e-bile” describes the extravagant invective[s], the sexualised threats of violence, and recreational nastiness that has come to constitute the dominant tenor of Internet discourse… the term refers to a text or speech act which relies on technology for communication and/or publication, and is perceived by a sender, receiver, or outside observer as involving hostility. (2012: pp.2-3).

In just a few weeks of data collection we have been overwhelmed by the ubiquity and normalised nature of these kinds of speech acts. This kind of collective, ‘recreational nastines’s towards celebrities like Kim or Nicki is so pervasive, participating in it appears not only to be permissible but a form of pleasure and one-up(wo)manship. For example, tweets about Kim Kardashian are saturated with markedly misogynistic language and sexualised imagery about her supposed route to fame (‘When Kim Kardashian’s kids finds her sextape, they’re going to be like “damn mommy, that ain’t daddy….”’) and racially-charged statements about Kim’s personal relationships and pregnancy: (‘Kim Kardashian‘s baby will be the whitest person to ever see her vagina’). The distinctly gendered, racalised and classed nature of online celebrity discourse is startling and oppressive, and Laura and I (responsible for these two celebrities respectively) have said that we’ll need to provide each other with some kind of therapy to help us cope with these toxic encounters.

As Emma A. Jane says, these no longer represent a ‘dark underbelly’ of cyberspace but rather circulate freely throughout the internet – and we would argue, seep into and intersect with other discursive modes and spaces – including the offline exchanges about celebrity and aspiration among young people in our research. I’ve found Emma A. Jane’s work really useful and I’ll be posting something soon about the significance of these ‘speech acts’ in governing young people’s aspirations and identities in the future. However, I want to move on by contrasting these hostile and ‘ugly’ discussions about celebrity to more ‘positive’ kinds of discourse found online (and offline) about another of our other case study celebs – Will Smith.

As Heather has explained, Will Smith came up in several of our focus groups and has, consistently, been discussed in positive ways by our participants. Will was picked not only because of the interesting discussions within the groups about male Hollywood film stars, but also the immense popularity of African American ‘celebrities’ (including Obama and Mike Tyson) across the groups, and the interesting discourses of race and aspiration circulating within these. Picking Will as one of our 12 will allow us to address and unpick these in more detail. In addition, there’s been interesting conversations about his family. Interestingly, the centrality of Will’s family to young people’s talk about him chimes with both his recent evocation in the press as a perfect ‘father figure’ to a seemingly ‘off the rails’ Justin Bieber, and various tweets in which Will Smith is desired as the dream dad (e.g. ‘Will Smith please adopt me’). Perhaps not coincidently, and speaking to the inter-textual construction of the celebrity image, Will’s next film, After Earth, is a post-apocalyptic father and son story in which Will acts alongside his real son, Jaden.

However, what is perhaps most intriguing about Will’s celebrity and his popularity with our participants is the place of The Fresh Prince of Bel-Air in young people’s talk about him and, it seems, the broader public imaginary. This text, which launched Will’s career in the 1990s, remains a central part of his appeal. For those not familiar with the programme, it documents the life of a teenage Will as he moves from a single parent home in the ‘ghetto’ of West Philadelphia, to live with his affluent aunt, uncle and cousins (and live-in butler) in their Bel-Air mansion. In various ways – and in particular, through the relationship between ‘streetwise’ Will and his naïve, preppy cousin Carlton – the show speaks to themes of ‘blackness’, masculinity, racism and social class in American society. In the late 1990s Les Back pointed to the growing popularity of black American youth culture among London youths, also revealed in Suki Ali’s research with mixed and inter-racial children (2003) where Will was universally popular, deemed attractive, funny, talented and representing a ‘non threatening’ model of black masculinity.

A decade or so on, the continual significance of The Fresh Prince to Will Smith’s image is not simply about a kind of 1990’s nostalgia held amongst those 20- and 30-somethings who watched the show decade ago. It is being reproduced through contemporary youth cultural practices: As the show is still replayed daily on digital television, it is not surprising that it occupies as significant a place in the lives of contemporary youth as it did for me as a teenager, where sitting down at 6pm to watch The Fresh Prince… was a consistent feature of my after-school activities. As Tyler Bickford notes in his blog, and as a response to the range of celebrities mentioned by our participants, there may be some interesting ‘process of canonization that takes place largely inside kids’ peer culture’ which is worthy of further unpicking. 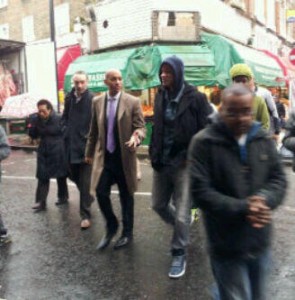 I was reminded of this last week when Will Smith made a surprise visit to a girls’ school in London with MPs Chuka Umunna and Tessa Jowell. The racial context to this visit is fascinating in terms of the school’s largely BME pupil demographic and location in Brixton, and Chucka Umunna’s own image as a mixed-race, ‘cool’ young local MP (the British Obama or Black Blair no less). Speaking to the area’s racial signifiers, Tessa Jowell tweeted: “Will Smith wanted to see ‘London’s Harlem’! So proud to show him the best of Brixton!”. As well as giving a ‘motivational speech’ (which we’ve now discovered he’s pretty prolific at), Will sang along to the theme tune of the Fresh Prince with an assembly hall packed with pupils – all of whom knew the words perfectly.

The adoration and deep affection for Will and in particular his incarnation as the Fresh Prince is compelling and, as I have found, inescapable. On Saturday I encountered two more examples of ‘Will-Fever. Trying to practice the spirit of practising a more ‘mobile sociology’ which makes the most of the technology we as researchers have at hand to capture and attend to the social worlds we are studying, I decided to capture these on my i-phone camera. The first is a jumper with Will as the Fresh Prince on sale in a local sports shop in Manchester, and another Fresh Prince embellished T-Shirt, worn by a guy I spotted in a bar on Saturday night (excuse the blurriness of the image but he was having a good dance). 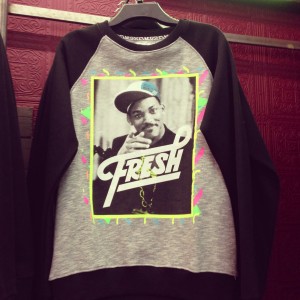 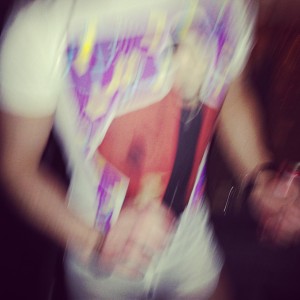 Don’t be surprised if more photos appear on here soon.