Over the last fortnight, our screens have been filled not with the usual diet of size-zero actresses and surgically enhanced reality TV stars but with women   who are proud to look powerful, who have muscles and who aren’t afraid to sweat and pant their way to a gold medal.

While the strong, muscular, fit bodies of the Olympic women arguably offer a refreshing alternative to the constant stream of emaciated bodies we see in popular media, I argue that we also need to be cautious with claims that these ‘real’ bodies offer a radical and empowering template for young women. The cultural framing of female Olympians is replete with neoliberal and postfeminist discourses of the self: we hear constantly of their hard work, self-motivation, self-regulation and self-discipline. Indeed, these female Olympians can be seen as what Angela McRobbie calls the ‘Top Girls’ of neoliberalism, where contemporary young women are surrounded by injunctions to be successful, agentic, mobile ‘can do’ subjects of social change; claiming their place in education, work, personal relationships and consumer culture. But as McRobbie shows, despite proclamations of female success, freedom and empowerment, women’s bodies are still tightly regulated and their participation in education and the labour market constrained by strict gender norms. Such injunctions to achieve an unobtainable ideal, and the responsibilising for their own success and failure (accompanied by a repudiation of feminist critique) can result in a range of ‘post-feminist discontents’ such as body anxiety and eating disorders. In Pendleton’s autobiography and in recent interviews, she has revealed that she has suffered from Obsessive Compulsive Disorder and bouts of self-harming, perhaps revealing the costs of such scrutiny and expectations on both the successful female body and successful female self.

Female Olympians were constantly objectified and sexualized this summer: see for example, the ‘Bodies in Motion’ video produced by NBC – the official Olympic broadcaster in America – which shows slow-motion footage of female athletes and was criticized for it’s soft-porn aesthetic and focus on mainly white, slim bodies.  While Pendleton was praised for her good looks and sporting competence, perhaps what makes her so palatable and praiseworthy is that she doesn’t transgress rigid gender norms of appropriate heterosexual femininity: Pendleton has consistently claimed to be proudly ‘girlie’ and glamorous out of free choice rather than objectification; refuses to ‘behave like a man’ to get ahead in the professional cycling arena; posed for FHM in 2009; and has had a well-publicized relationship with her male sports coach. In addition, associating herself with brands such as hair product Pantene, we are shown Pendleton’s investment in her beauty regime, reinforcing her image as glamorous and feminine. As the advert professes, Pendleton is a woman who wants to ‘win as an athlete and shine as a woman’. In combining a celebration of sporting prowess and investment in girlie-femininity as a personal choice, Pendleton’s media image represents a number of strands of what Ros Gill calls the post-feminist sensibility in which feminist and post-feminist ideas are deeply entangled: the notion of femininity is a bodily property, expressed through practices of empowered consumption; the shift from sexual objectification to sexual subjectification; and the reassertion of sexual difference. 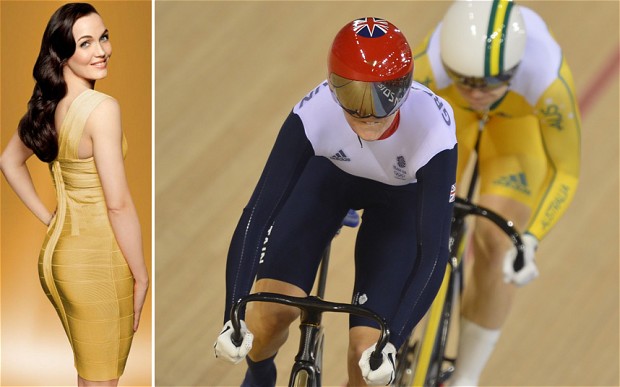 Other female sportswomen who did not so easily fit the white, slim, heterosexual, hyperfeminine ‘look’ were not only marginalized in media stories about positive role models, but were subject to misogynistic hate-speech throughout the games and preceding them. Weightlifter Zoe Smith was subject to Twitter vitriol for ‘not being feminine enough’ and only last year, comedian Frankie Boyle announced on TV show Mock the Week that Olympic medal winner Rebecca Adlington ‘looked weird’ and therefore could only have an attractive boyfriend because she ‘is dirty in bed’. Such offensive and viscous attacks reveal the constant regulation and scrutiny these Olympians are subject to and problematize the celebratory discourse of the ‘Olympic Female Role Models’.  Finally, we need only turn to the recent media persecution of Lady Gaga’s apparent weight gain to remember that the very publications in which these celebratory stories of ‘real’ bodies feature also contribute to ‘fat-shaming’ and the idealization of the thin female celebrity body.

I also want to say something else about the discourses which underline media reporting and social commentary on the ‘positive alternatives’ that Olympians offer young women within contemporary popular culture. As we’ve discussed elsewhere, the hierarchies of contemporary celebrity – between the deserving and undeserving, the worthy and the tacky – are based on and reproductive of wider value systems which are classed and gendered. Indeed it is often working-class female figures (Kerry Katona, Katie Price, Jade Goody, or the stars of The Only Way Is Essex) who get called upon to represent all that is bad about contemporary celebrity based on being ‘famous for nothing’.  These classed, gendered bodies get read as value-less. As we show in our previous research with young people, these evaluations miss the complexity of how they actually engage with celebrity in their everyday lives and read value off different celebrity figures. For example, we show how for working class young people Reality TV stars are not seen as worthless but valued for their authenticity and ‘success’ in the face of adversity. We also illuminate that these wider hierarchies play a productive role in marking out ‘good’ and ‘bad’ aspirations and regulating young people’s educational choices and destinations. 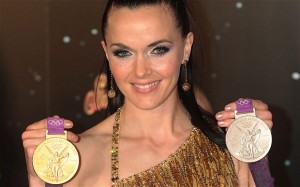 Victoria Pendleton again represents an interesting case study in the nature of the value judgments and hierarchies that characterize contemporary celebrity. It was recently announced that Pendleton, following her retirement from professional cycling, was to star in the new series of Reality TV dancing show Strictly Come Dancing.  In an article in the Mirror, journalist Polly Hudson proclaimed that Pendleton was ‘too good for Reality TV’, a genre that is apparently only for ‘talentless’ celebrities such as Lauren Goodger from The Only Way is Essex:

NO, NO, NO. The athletes who just made every heart in Broken Britain swell with pride need to steer well clear of the Reality game and concentrate on the Olympic, er, game instead. They are better than that. Lauren Goodger has just quit TOWIE to appear on Dancing On Ice, and THAT is the way it should be. She is exactly the type of celebrity – desperate and completely talentless – that we should see humiliating themselves on these shows, not the people we all currently admire.

Hudson’s anxious call to Pendleton to steer clear of Strictly Come Dancing is problematic for the reasons I have laid out above. But it also reveals the labour that goes into defending these boundaries of the ‘good’ and ‘bad’, ‘worthy’ and ‘unworthy’ celebrity, and how arbitrary and fragile these boundaries are. It will be interesting to see where Pendleton’s celebrity status goes next: will the poster girl for the Olympics remain the source of ‘national pride’ or be persecuted for making the wrong choices and representing the ‘wrong’ type of success?

As Su Holmes and Diane Negra have argued, ‘contemporary female celebrities are placed to operate as lightning rods for a range of concerns’.  We might argue then that the celebration of these female Olympic ‘role models’ are in a perilous and precarious position, part of an ongoing project in which female celebrities are called upon to articulate wider societal anxieties about the nature of fame, achievement, talent, and, more broadly, contemporary female identities and ‘success’.