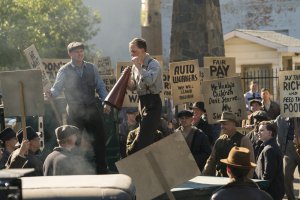 How woke is Damnation?

The drama centres on two characters: activist Seth and strikebreaker Creeley. Seth is masquerading as a preacher to enable him to organise farmers in Ohio  and to ‘break the system’s back one arsehole banker at a time‘. When one of his parishioners comments on his sermon that they’ve ‘never seen the pulpit used for politics like that‘, Seth replies with a line from Karl Marx ‘well, the point’s not to just understand the world but to change it‘. The confused local asks ‘Is that in the Bible‘? And Seth assures him: ‘It’s on every page‘. This blurring of God and Marx runs through the series. As the strike continues and the bankers’ efforts to break it intensify, the idea of workers becoming God’s body serves as a metaphor for solidarity and collectivism.

The show depicts what Marx called primitive accumulation, as big capital in the form of the banks commodifies land by dispossessing the farmers of their homes and livelihoods. It depicts how this process is driven by class hatred and shows the bankers in league with the white supremacist Black Legion, manipulating the media and the law, fixing elections and using an organisation called American Prosperity to spread their ideology. There are thinly-concealed parallels with today recalling how banks repossessed homes in the aftermath of the 2008 financial crisis and how Trump and the Republicans have risen to power backed by neo-Nazis and the KKK on the one hand and the billionaire Koch brothers’ organisation Americans for Prosperity on the other.

Series creator Tony Tost denies that Damnation aligns with the left: ‘I want the show to ask interesting questions about America without resorting to the left versus right political mania that has gotten in the way of any reasonable discussion in this country’. But Tost does admit that he has ‘a blue collar chip‘ on his shoulder and a political agenda to represent the working class: ‘I’ve always felt that the deck was stacked against someone with my class background. And I think blue collar life — whether white, black, latino, mixed or otherwise — is radically under-represented on American TV’. So while meanings don’t reside in any cultural text independent of how people engage with it, as Vox notes and as I discuss next, ‘it’s rare for an American television show to be as skeptical of capitalism as this one is’.

What’s the politics of US television?

Most US television drama appears not to have a politics but is perhaps best described as liberal. Liberals, as Phil Ochs so memorably put it, are ‘an outspoken group on many subjects. Ten degrees to the left of center in good times. Ten degrees to the right of center if it affects them personally’. From The West Wing to The Good Place to Gilmore Girls, there’s an underlying assumption that history is progressive and we’re all on the same side. Change comes from heroic individuals (whether presidents, angels or single mums) not collective action by ordinary folk. In contrast, in Damnation, viewers and characters are asked repeatedly ‘which side are you on‘? There’s no sense that things are inevitably going to get better; more likely the opposite. Any change is hard won and comes from the bottom up through solidarity and struggle: ‘Real change is the change the people make, but corralling the people in the same direction takes more than lighting the spark. It’s hard, backbreaking work, and it’s never, ever over‘.  You can’t win, but you can keep on fighting.

There are other US TV shows whose politics aren’t mired in liberalism. The Wire depicts the impact of deindustrialisation on the working class, the destructiveness of the so-called war on drugs and how schooling reproduces inequalities of race and class. Oz takes on the prison industrial complex, its violence and oppression, frequently pitching a white liberal’s failed approach to prison reform against the analysis of black Muslim leader. Deadwood plays with the same tropes as Damnation showing over three seasons the appropriation of land by the corporate bankers in a gold-rush town. These are all made by cable channel HBO who’ve never decided the fate of a show based on ratings alone. Yet none of them have staged the struggle between capital and labour in such stark terms as Damnation, based, as one character puts it, on ‘ tried and true European Marxist principles‘.

Television is popular pedagogy, if we want to change the world we need to do a lot of things – we need to be on the streets protesting and on the doorstep canvassing, writing emails, making phonecalls and putting forward alternative ideas. We also need to be creating engaging narratives that tell socialist histories. So if we want more woke TV dramas, we need to support the few we’ve got. So turn on Netflix, watch Damnation and if you like it spread the word and sign the petition to get a second season.