We wanted the event to be a different in lots of ways so we organised a performance the night before, followed by food, drink and a quiz.  Bryony Kimmings delivered a lecture incorporating performance art (including singing, dancing and dressing up) about her work on the project ‘Credible Likeable Superstar Role Model‘ in which she and her (then) 9 year old niece Taylor set about making the ideal female (and feminist) celebrity, the result of which was tuna pasta-eating, palaeontologist and part-time pop star Catherine Bennett.

We then enjoyed a celebrity-themed quiz, created by the brilliant Katy Vigurs, and celebrated in true CelebYouth spirit with a massive project-themed chocolate cake provided by vegan baker Ms Cupcake, and decorated with our favourite case study celebrities. Cake eaten, wine drunk and quizzed-out, it was time for bed before the ‘proper’ event started.

On Friday, delegates gathered for a full day of papers and discussion. We split the day into three sessions, which spoke to the main academic fields to which we sought to contribute through the project.  For each, there was a short paper from one of the CelebYouth team, followed by responses from two invited speakers drawn from academic and practice users respectively.  As a group of education researchers who believe we should practice good pedagogy at academic events, we left plenty of time for discussion among delegates throughout the day and through a number of participatory activities which encouraged people to reflect on their own work as well as their own investments in celebrity culture (We even asked delegates to name their favourite celebrity on their name badge and created space in the programme for them to discuss their celebrity tastes!).

Summaries of three sessions and respondents are detailed below in brief along with audio files and powerpoints.

In this first session, Heather kicked off the day by talking about the project’s contribution to work within the sociology of education.  She argued that, in contrast to previous findings that hard work is devalued in favour of effortless achievement, our ‘celebrity talk’ shows hard work is now valued by young people in England. This valuing crosses divisions of gender and social class and between compulsory and post-compulsory education. However, she went onto suggest that we should not simply celebrate young people’s investment in hard work. While it does open up successful subjectivities to previously excluded groups, it also reproduces neoliberal discourses of meritocracy and class and gender distinctions. Notably women and the working-classes continue to be excluded from the realm of intellect and reason, which is coded as masculine, middle-class and White; and White and Black working-class women remain constrained in how and how far they can inhabit success.

Heather’s paper was followed by two fantastic responses, from Geeta Ludhra (Lecturer in Education, Brunel University) and Camilla Stanger (teacher and doctoral student at Goldsmiths, University of London). Geeta related the ideas about hard work to her ethnographic study of successful British Asian girls and to her experiences of her young neices and nephews celebrity play. In particular, she recalled how when she had taken her findings back to her research participants, calling them the ‘want it all girls’, they had replied to her, ‘yes, we’re the want it all girls, but we graft for it’, stressing their hard work. Camilla spoke in detail about one of her dance students who is seen as ‘difficult’ by most of her teachers. She spoke about how the research had helped her to understand this student differently by thinking back to a day when she brought in a picture of the Kardashians and went round the whole class asking ‘Do you want to see a picture of my sisters?’. Camilla offered a reading whereby this action became a way to bring her domestic and familial labour into the college space. We hope to be publishing these response on the blog soon and will add links when we have.

In this session Laura talked through the project’s contribution to work within the sociology of youth. She located the project as at at the intersection of two dominant areas of work on youth – youth transitions and youth cultural practices – identifying how young people’s consumption and talk about celebrity culture provides an insight into the ways in which they are making sense of their futures in times of growing inequality. In particular she tracked how specific ‘rhetorical strategies’ legitimate inequalities between normal people and celebrity elites. For example, when we talk about celebrities doing extraordinary things, such as Bill Gates eradicating polio or David Beckham giving his entire salary to charity, it seems like they deserve what they have. Alternatively, when celebrities fall into cycles of drug and alcohol dependency or succumb to pressures to look a certain way even to the extent of having surgery to do so, it can make our own ‘ordinary’ lives  look more attractive.

Laura’s talk was followed by responses from youth worker and sex educator Justin Hancock and Professor Rob MacDonald (Professor of Sociology/ Deputy Director – Social Futures Institute, Teeside University). Justin highlighted how media influence, from discussions of pornography in his own work to discussions of celebrity culture in our work, is usually seen to affect someone else. He thus invoked us to think about our own position as ‘adults’ and our desires to protect children and young people, while seeing ourselves as critical and sophisticated consumers.  Rob focused on continuities and discontinuities between our own age of austerity and earlier times, in relation to young people and their futures. He also drew attention to young people as active in resistance to the current structures, paralleling our own moves away from seeing young people as passive absorbers of their cultures.

In the last session of the day, Kim discussed the project’s contribution to work on celebrity within media and cultural studies, particularly the growing field of ‘Celebrity Studies’.  Kim talked through the dominance of textual analysis of celebrity, and how our project’s turn to ‘audiences’ – the use of celebrity within everyday life – makes a difference to what we know about celebrity and its function.

The paper was followed by  responses from Dr Anita Biressi (Reader in Media Cultures, Roehampton University) and Bim Adewunmi (freelance journalist who has written for The New Statesman and The Guardian ). Anita spoke about how following her undergraduates students’ media interests had taken her research in new directions. She recounted stories of a range of micro-celebrities whose DIY careers via social media had reduced the distance between producer and consumer and created models for being. Taking this up, Bim spoke of the huge number of young women who are making their way as fashion vloggers on YouTube. She also called attention to the absence of race as a focus in our research, arguing that this is essential to understanding the representations and response to women of colour such as Beyoncé and Solange Knowles.

We finished the day with a wine reception to launch our new ‘mythbusting’ website – created with the help of practitioners who advised us on how to make the research findings accessible to non-academic users, and with brilliant illustrations from designer Cat Drew and webdesign from Bowler Hat. We’ll be working on developing and communicating the website over the next academic year. 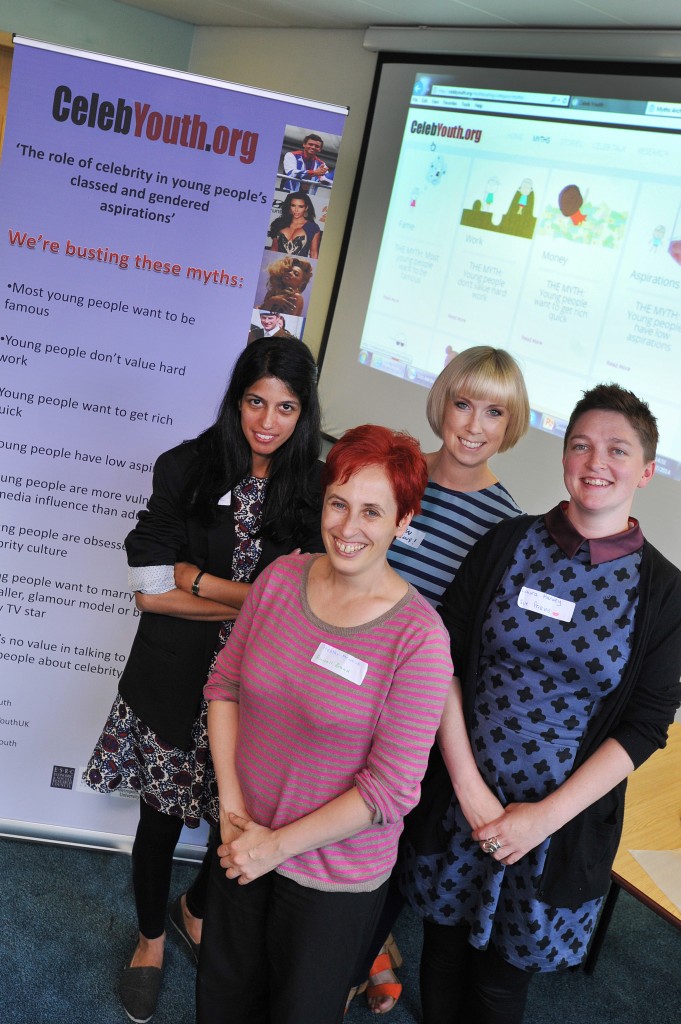 Massive thanks to Sally Trussler for providing so many wonderful images from the event.

You can read more about the event on the the event’s  storify and in Tristram Hooley’s blog.