Adam Curtis’ new documentary Bitter Lake, available via the BBC iplayer, focuses on the relationship between ‘the West’ and Afghanistan and is described as “a new, adventurous and epic film that explains why the big stories that politicians tell us have become so simplified that we can’t really see the world any longer”.  In this post  Heather and Kim explore what kind of story Curtis tells and why it matters.

Adam Curtis has built up a corpus of original documentary work that explores freedom and selfhood, psychoanalysis, the global financial system, the interweaving of political and religious fundamentalisms,  and the manipulation of history and memory. Running through all of these is a concern with the role of the media in our lives, in all its forms – the popular press, film, advertising, the internet, and so on. If you’re new to his work, the short film below will give you a sense of his style, as diverse video footage is variously assembled and accompanied by music and a gentle but authoritative voice-over, in order to convey an argument drawing together and making new sense of some things you know and some things you don’t.

Bitter Lake is a distinctively ‘Adam Curtis production’ in both its style and its content. It is unusual only for being distributed via iplayer rather than via scheduled television, presumably to escape certain constraints including length as the film runs to 136 minutes.

Curtis uses the film to provide us with a broad context for the ongoing conflict in Afghanistan, beginning with a 1945 meeting between the then leaders of the US and Saudi Arabia on a warship on the eponymous Bitter Lake in Afghanistan. The story he tells then crosses between America, Saudi Arabia, Britain, the Soviet Union and Afghanistan. It explores war and diplomacy, the financial crisis, and trade in oil, opium and arms, and aims to critique the simple stories of good versus evil – heroes versus villains – that politicians and the mainstream media collaborate to tell us. The current success of American Sniper, which tells about as reductive a story of good Americans vs evil Afganis as its possible to imagine, at the US box office and in the Oscar nominations, shows how much we need stories like Bitter Lake. Stories that refuse simple polarities and elaborate the multiple connections between the war on terror and the economic crisis. As our governments increasingly turn to war as a solution we need more films like this that can show us the futility of war  – as does the first World War biopic Testament of Youth also financed by the BBC and currently in cinemas.

As we’ve worked on the CelebYouth research, we’ve thought a lot about which stories get told, when and by whom, and for what purposes, and this documentary has a lot to say about that. Sadly, it has less to say about how we can change the dominant storylines, apart from by making more documentaries like Bitter Lake and by spreading the word about those that are already out there. The only thing we found frustrating about it is that Curtis, while critiquing the simple stories we are increasingly told by western media and governments, presents us – as an alternative – also with a single story.

However, the visuals exceed and undercut the simplicity and authority of Curtis’ voice-over. The film includes a lot of long-takes and close-ups of the faces of soldiers (British, American and Afghan) where their eyes flicker on and off the centre of the camera, holding shots that would usually be cut to tell tight stories and construct stock characters. Many other clips defy simple interpretation, as when a member of the Taliban’s mobile phone goes off after he’s asked a question in an interview (we see nothing of the interview beyond this) or when we see US soldiers getting their nails done in a’beauty bar’. 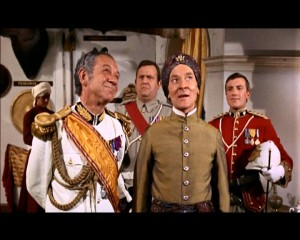 Curtis makes some fascinating juxtapositions which also help to open up his otherwise closed narrative. In particular he inserts extracts from Carry on… Up the Khyber the film in the Carry on series bawdy British comedies that pits British colonialist Sir Sidney Ruff-Diamond against the Khazi of Kalabar who conspires to kill the imperialists, taking snipes at both side. Sometimes he provides alternative backing music for these extracts which help shift their original meanings – from David Bowie’s ‘Bewlay Brothers‘  to Kanye West’s beautiful ‘Runaway’ (you can read more about his  musical tastes here). Similarly, Curtis uses Tarkovsky’s classic sci-fi film Solaris to create an extended metaphor between the planet in that film that transforms the lives of the astronauts who encounter it, blurring fantasy and reality and animating their dead, and the impact of encountering Afghanistan on the West. 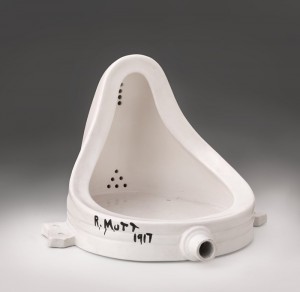 What we found powerful about these was that they invoke parallels between (British) colonialism and contemporary Western imperialism. It is these parallels that infuse the most fascinating scene in the film in which a young white woman, as part of a British cultural envoy, with the aid of a translator, teaches a room of silent Afghanis about Duchamp’s famous Fountain artwork, when he signed and exhibited a urinal.  The scene is so baffling and uncomfortable. For both of us it captures probably the most disturbing and pressing theme in Bitter Lake. Immediately it recalls Edward Said’s work on Orientalism, culture and colonial rule. But it also, like Duchamp’s Fountain remains open to multiple, shifting interpretations.