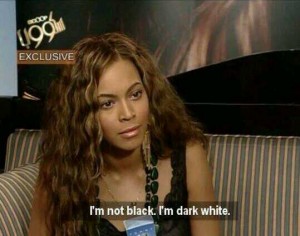 As the title of a conference on passing at Goldsmiths, coincidentally also held last Friday, suggests, passing disrupts visibility, whether that passing is in relation to race, gender, class, sexuality or disability. As Sara Ahmed put it: ‘Those whose being is in question are those who can question being’.

Although Dolezal’s case involves direct sustained deception, including claiming a father who was not her own, much passing is unintentional and happens through the eyes of the beholder rather than the actions of the beheld. Yet, even in these cases, passing carries with it an implied accusation, or at least a suspicion, of deception, of intention to defraud. It thus raises questions of authenticity.

Authenticity, or being oneself, as Kim and I have discussed, has become a moral duty. We are constantly told that what matters is being true to youreelf, and everyone, whether Reality TV contestants or politicians, is judged by how far they have managed to do just this. In our research into young people’s views on celebrity, authenticity emerged as central to who is valued.

Over and again, when we asked young people to explain why they disliked a particular celebrity, they would talk about them as fake. It was women, particularly if they had had plastic surgery, who were most likely to be accused of being fake. And black and working-class women, were more likely to be accused than white middle-class women. One of the things that young people said they valued in celebrities was giving money to charity. Yet here too young people are engaged in  complex judgements about whether acts of charity are real or fake. And here too women fared worse, with their charity more often dismissed as inauthentic, motivated by a desire for publicity. It thus interested me that a black female celebrity, Beyoncé, seemed to pop up more than any other celebrity in online interactions about Dolezal.

Some of the tweets about Dolezal expressed a desire to be Beyoncé but many were directly or indirectly critical as with the image above where the caption ‘I’m not black. I’m dark white’ is superimposed on a photo of Beyoncé. Here are a couple of tweets:

#RachelDolezal HAS ME QUESTIONING BEYONCE’S ETHNICITY.

Many were directly racist. Some mentioned skin whitening. Some included photos, such as those below, mimicking the dual images that the media circulated of Dolezal. 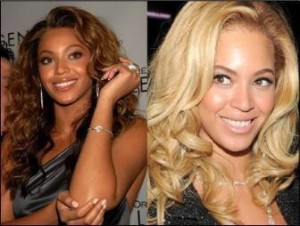 Plenty of people defended Beyoncé against these explicit and implicit accusations of deception:

“@p0pson: I think #RachelDolezal blacker than Beyoncé… At least she try to claim to be black” LMAOOO

Yet, these Dolezal/Beyoncé tweets are another reminder of how difficult it is to be a black woman in the media spotlight and how easily you can become a target.